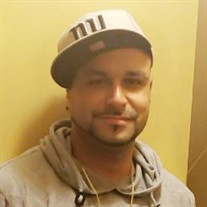 Our beloved Andresito “Andy” Bermudez, 36, of Allentown, passed away on Monday, May 24, 2021. Born November 9, 1984, in Brooklyn, New York, he was a son of Sandra Vasquez and the late Juan Bermudez. Andy met his wife Sabrina at the age of 16 in Allentown and they have been married for 10 years. Andy was a devoted father who enjoyed spending time with his three daughters. He was truly a kid at heart with a boisterous laugh. He had a big heart and was someone who friends and family could depend upon, as he was always willing to go above and beyond to help anyone. In his leisure time, Andy enjoyed playing video games, cheering for the New York Giants, working on cars and listening to loud music. In addition to his father, he is preceded in death by his grandparents, Andresito and Rosa Bermudez. Andy will be lovingly remembered by his wife Sabrina (Follweiler) Bermudez; three daughters: Angelina, Jadalynn, and Myalise Bermudez; his mother: Sandra Vasquez; three brothers: Juan Bermudez Figueroa (Linda), Juan Alberto Bermudez (Soraya), Adam Vasquez; one sister: Barbara Bermudez (Robert King); one brother-in-law: Thomas Follweiler; one sister-in-law: Charlotte Elchaar (George); and several nieces and nephews and extended family members. A visitation will be held at the Connell Funeral Home, Inc., 245 East Broad Street, Bethlehem, PA, on Wednesday, June 2, 2021 from 6:00-8:00pm. A second visitation will be held at the funeral home on Thursday, June 3, from 10:00am until the time of the funeral service at 11:00 a.m. Interment will be in Nisky Hill Cemetery, Bethlehem.

The family of Andresito "Andy" Bermudez created this Life Tributes page to make it easy to share your memories.

Send flowers to the Bermudez family.