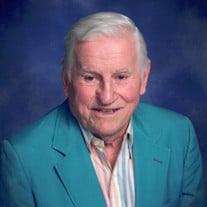 Charles Michalerya, 90, of Bethlehem, died on May 9, 2022 at his home. Charlie was born April 10, 1932 in Bethlehem, son of the late Charles and Mary (Voltral) Michalerya, who were members of St. Nicholas Russian Orthodox Church, Bethlehem. Charlie was preceded in death by his wife of 49 years, Eleanor R. (Scroce) Michalerya. Charlie was a graduate of Liberty High School, class of 1950. He retired in 1982 after 31 years of service at Hellertown Manufacturing, where he worked in the Receiving Dept. After retirement, Charlie worked as a clerk for PA state liquor stores. He was a member of St. Annes Catholic Church. Charlie was a true gentleman. He formed great bonds with friends while bowling, golfing and playing basketball. Maze, as he was known to some, was a life member of the Heights A.A., Jefferson Democratic Club, and N.E. Wanderers A.A. Cats were a major part of Charlie’s entire life. Charlie and Eleanor were Musikfest and Celtic Classic volunteers for 19 years and traveled throughout the world together. He will be dearly missed by his nephews, William, Steve, Vance, and Eddie, nieces, Mary, Monica, and Cindy; great-nieces and great-nephews, including Matt and Robert; as well as extended family and friends. He was predeceased by his brothers, Nicholas, Michael, Earl, Pete, Ed and Steve; and a sister. Arrangements have been entrusted to Connell Funeral Home. A visitation will be held on Monday, May 16, 2022 from 10-11 a.m. followed by Mass of Christian Burial at 11 a.m. all at St. Anne’s Catholic Church, 450 E. Washington Ave., Bethlehem, PA 18017. Interment will be held at Holy Saviour Cemetery. In lieu of flowers, Center for Animal Health and Welfare, American Cancer Society, Meals on Wheels and/or St. Luke’s Hospice.

Charles Michalerya, 90, of Bethlehem, died on May 9, 2022 at his home. Charlie was born April 10, 1932 in Bethlehem, son of the late Charles and Mary (Voltral) Michalerya, who were members of St. Nicholas Russian Orthodox Church, Bethlehem.... View Obituary & Service Information

The family of Charles Michalerya created this Life Tributes page to make it easy to share your memories.

Send flowers to the Michalerya family.