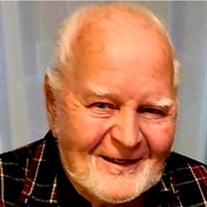 Dennis McKay, 79, of Easton, died on February 13, 2021. He was born in Bethlehem on October 16, 1941, son of the late Floyd W. and Mary (Lebeduik) McKay. Dennis is survived by his devoted wife of 56 years, Marianne E. (Cahoon) McKay. Dennis was a graduate of Liberty High School and Bethlehem Area Vocational-Technical School. He was proud of his service in the U.S. Navy with the rank of Seaman. Dennis was selected to serve in the U.S. Navy Honor Guard and Ceremonial Guard Units at the Pentagon in Washington, DC and participated in the inauguration of President John F. Kennedy. Dennis was the orderly for both Admiral Arleigh Burke and Admiral George Anderson. He was attached to Admiral Anderson during the Cuban Missile Crisis. Both Admirals were the Chief of Naval Operations at the Pentagon. Dennis was a talented and meticulous toolmaker. He retired in 2002 after working as a machinist/tool and die maker for Bethlehem Apparatus Company, Hellertown Manufacturing Company, Champion Spark Plug, and Binney & Smith, Inc. Dennis was a member of the Hellertown American Legion, National Rifle Association, and United Auto Workers. He was proud of his Russian heritage. He will be lovingly remembered for his kindness and caring demeanor. Dennis was often concerned with the well-being of those he loved. He was most proud of this family and appreciated spending time with them. In his free time Dennis found great enjoyment in hunting, fishing, and camping. He also enjoyed traveling with his wife. Their list of destinations is quite extensive, but he especially found Alaska, Maine, and Hungary to be worthy of multiple trips. Dennis also attended numerous country music shows on their many trips to Branson, MO. Dennis will be dearly missed by his wife, Marianne; daughter, Sharon L. Shultz and her husband, Robert; sons, Michael L. McKay and his wife, Adel; and John Z. McKay; as well as his grandchildren, Jesse, Ethan, Mahala, Cariana, Olivia, Maya, and Isaac; and step-granddaughter, Ami, and her family. He was preceded in death by his brother, Leonard. Arrangements have been entrusted to Connell Funeral Home. All are welcome to attend a graveside service with military honors on Wednesday, February 24, 2021 at 12:15 p.m. at Union Cemetery of Hellertown, 85 Main St., Hellertown, PA 18055. Guests are welcome to park on Walnut St. and wait for the direction of cemetery or funeral home staff. Memorial contributions may be made to Easton Emergency Squad, 908 Packer St., Easton, PA 18042.

The family of Dennis McKay created this Life Tributes page to make it easy to share your memories.

Send flowers to the McKay family.