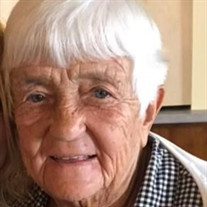 E. Ruth Prosser, 90, of Bethlehem, died on April 11, 2022. She was born in Bethlehem, daughter of the late Roy and Edna May (Shiner) Ueberroth. Ruth was preceded in death by her husband of 63 years, Elmer Parkinson Prosser. Ruth will be lovingly remembered as a devoted wife, mother, and grandmother who enjoyed nothing more than to be with her family. Ruth was always active and never wanted to miss any of the fun. She enjoyed attending the sporting events of her children and grandchildren, and Ruth was an avid Philadelphia Phillies fan. Ruth found great peace in being outside; especially during the family trips to the beach. She could often be found reading or tackling a cross word puzzle. Ruth was a graduate of Allentown General Nursing School. She worked as a Registered Nurse for St. Luke’s Hospital and VNA, prior to accepting a part-time position with the City of Bethlehem Health Bureau for 27 years. Ruth’s dedication to the city was evident during her time as a member of the Bethlehem Area School District School Board for 18 years; serving as the first female president in school board history. She was also a member of the Bethlehem Halloween Parade Committee for many years. She will be dearly missed by her children, Tom Prosser and his wife, Karen; Jane Persa and husband, Dan; and Rob Prosser and wife, Linda; grandchildren, Richard Prosser (Kaitlyn); Rachael Roth (Cory); Emily Betley (Chris); Dan Persa (Megan); Drew Persa (Jessica); Allison Sassano (Chris); Amy Ervin (Sean); and Megan Ball (Craig); as well as nine great grandchildren, and many nieces and nephews. Ruth was predeceased by siblings, Muriel Frankenfield, Beatrice Raidline, William Ueberrorth, and Richard Ueberroth. The family will receive friends on Thursday, April 14, 2022 from 11 a.m. to 12 noon with a service to follow at Connell Funeral Home, 245 E. Broad St. Bethlehem, PA 18018. Interment will be held at Union Cemetery of Hellertown. In lieu of flowers, memorial contributions may be made to the Liberty H.S. Athletic Club, 1115 Linden St. Bethlehem, PA 18018.

E. Ruth Prosser, 90, of Bethlehem, died on April 11, 2022. She was born in Bethlehem, daughter of the late Roy and Edna May (Shiner) Ueberroth. Ruth was preceded in death by her husband of 63 years, Elmer Parkinson Prosser. Ruth will be lovingly... View Obituary & Service Information

The family of E. Ruth Prosser created this Life Tributes page to make it easy to share your memories.

Send flowers to the Prosser family.