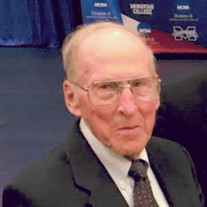 Gene Medei, 81, of Lower Saucon Township, died Sunday, May 23, 2021 at St. Luke’s Hospital-Anderson Campus. Born in Lower Saucon he was the son of the late Mary (DeFrank) and Anapo Medei. Gene was married to Loretta E. (Kichline) Medei for 40 years until her death on November 16, 2007. Gene was a 1961 graduate from Moravian College, earning a bachelor’s degree in business. While in college he played baseball where he was a 2-year letter winner, he wrestled where he was co-captain and 2-year letter winner as well, a member of Varsity M Club all four years, and the class Vice President. Later in Life Gene was honored by Moravian College, receiving the Robert Martin Herbstman Award in 2019. Gene went on to work in Washington D.C. for the General Accounting Office and after serving two years in the U. S. Army during Vietnam, he returned home and worked for Western Electric/AT&T/Lucent Technologies as a manufacturing manager, retiring in 1995. Gene would generously volunteer much of his free time as well for Lower Saucon Township Government and he dedicated 50 years to Freemansburg-Bethlehem Township Athletic Association which they honored him in 2018. Gene will be lovingly remembered by his sons, David Anthony Medei and his wife, Mary-Kathryn of East Lansing, Mich. and Christopher Myles Medei and his companion, Jenny Rakus of Lower Saucon, three grandchildren, Isabella, Anthony, and Christopher. Gene was preceded in death by his brothers, Matthew, James, John, and Anthony and sisters, Margaret Dominick, Betty Rippert, and Anna Ferencin. A viewing will be held on Friday, May 28, 2021 from 6-8 PM at Connell Funeral Home, 245 E. Broad St., Bethlehem, PA 18018. A calling hour will be held on Saturday, May 29th in the funeral home from 8:15-9:15 AM followed by a Mass of Christian Burial at St. Theresa of the Child Jesus Catholic Church, 1408 Easton Rd, Hellertown, PA 18055 at 10 AM. Burial will be at Holy Saviour Cemetery. In lieu of flowers memorial contributions may be made in Gene’s name to Miracle League of the Lehigh Valley, 1605 N. Cedar Crest Blvd. Suite 515A, Allentown, PA 18104

The family of Gene Medei created this Life Tributes page to make it easy to share your memories.

Send flowers to the Medei family.