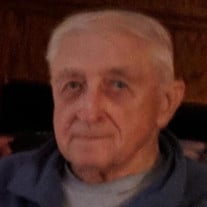 John “Jr” Zakszeski, 89, of Bethlehem, PA died on Tuesday afternoon, August 24, 2021, at his home in Bath, PA. Born September 26, 1931, he was the son of the late Anna (Danis) Zakszeski and John Zakszeski, Sr. He was a widower of 6 years, formerly married to the late Cecilia Zakeski in a military wedding ceremony during his years of service at Camp Cook, California, on April 11, 1951. John attended Liberty High School in Bethlehem. After graduation, he enlisted in the Army and was stationed in California. After returning to the Lehigh Valley, John began his employment with The Bethlehem Steel Corporation in 1952 for the Trucking & Transportation Department. He retired after 34 years as a General Foreman in 1986. After retirement, John was employed by the Commonwealth of PA as a Public School Employee, serving as an elementary school bus driver. He enjoyed this work for almost 9 years. And then, in the years that followed, he drove for the Lehigh University Transportation Department, shuttling students and athletes on campus. John enjoyed being an outdoorsman, loved hunting at his cabin in his early years, and driving cars and motorcycles. In recent times, he enjoyed gardening, landscaping, and taking care of the horses on his farm. He is survived by his daughter, Mary Ann. A viewing will be held on Friday, September 3, 2021, at Incarnation of Our Lord Parish, 617 E. Pierce Street, Bethlehem, PA 18015 from 9:00 to 10:00am, followed by a Mass of Christian Burial at 10:00am. Interment will follow at St. Cyril & Methodius Cemetery in Bethlehem. Lunch will be provided at the ArtsQuest Center at SteelStacks in Bethlehem. Arrangements are under the care of Connell Funeral Home. Memorial Contributions may be made in John’s name for the horses at Last Chance Ranch, Quakertown, PA 18951. www.Lastchanceranch.org.

The family of John Zakszeski created this Life Tributes page to make it easy to share your memories.

Send flowers to the Zakszeski family.