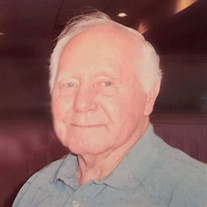 Joseph Flamish, Jr., of Bethlehem, PA, passed away Sunday, December 12, 2021, in the presence of his loving granddaughter. Joseph recently celebrated his 102nd birthday with his family. He would tell you though that he felt better than he did when he was 50. He was born in Allentown and was the son of the late Joseph and Mary (Yanger) Flamish. Joseph was a Staff Sergeant Paratrooper in WW II. He served in the 503rd Parachute Infantry from 1942-1946. Joseph worked as a welder for the Local Steamfitters Union 420 at the Bethlehem Steel, Steel Stacks, and the Limerick Nuclear Power Plant. Joseph enjoyed watching all sports but had a particular fondness for golf and baseball. He loved to play golf, baseball, go hunting and he was an excellent bowler. He was blessed to still play golf when he was 90. At one time in his youth, Joseph even held a track record for the long jump at Allentown High School. Joseph was a well-liked and well-loved man. He was overly generous and was truly dedicated to serving his family. Anyone who crossed his path later in life would tell you of his love of family and lifetime story telling. He took great pride in being a veteran and the time he spent serving his country. He was proud to be a provider and enjoyed taking care of others. In addition to his ex-wife, Shirley Flamish, he is survived by two sons: Joe and James Flamish: one granddaughter: Jeniffer Lang; two great-grandchildren; Emmy and Lucy; and sister: Virginia Flamish of Allentown. He is preceded in death by sisters Rose Flamish, Elsie (Flamish) Breidinger, Viola (Flamish) Max, Margaret Flamish, and brothers Frank and William Flamish. A graveside service, with military honors, will be held Friday December 17, 2021, at 2:00pm at Fairview Cemetery in Allentown. Arrangements are under the care of the Connell Funeral Home, Inc., 245 East Broad Street, Bethlehem.

Joseph Flamish, Jr., of Bethlehem, PA, passed away Sunday, December 12, 2021, in the presence of his loving granddaughter. Joseph recently celebrated his 102nd birthday with his family. He would tell you though that he felt better than he did... View Obituary & Service Information

The family of Joseph Flamish Jr. created this Life Tributes page to make it easy to share your memories.

Send flowers to the Flamish family.