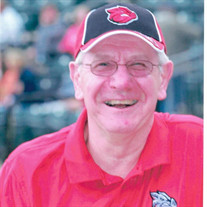 Joseph Jurnock, 80, of Allentown, died on Saturday, June 27, 2020 at Phoebe Home. He was born in Taylor, PA; son of the late Joseph and Olga (Dowhy) Jurnock. Joe is survived by his devoted wife, Barbara Jean (Godek) Jurnock. They would have celebrated 57 years of marriage this August. After graduating from Taylor High School in 1960, Joseph enrolled and graduated from Johnson Trade School. Joe retired in 2001 after 41 years of service for Western Electric, AT&T, Lucent, and Agere, where he worked as a machinist. He will be dearly missed by his wife, Barbara; daughter, Sharon Seritsky and husband, Anthony; and grandchildren, Marcus and Jasmine Seritsky all of Catasauqua; and Marissa and Braedon of Arizona; all deeply loved. Joseph was preceded in death by his son, Mark Joseph Jurnock in 2003. He served in the US Army Reserves for 6 years. Joe was a very active person and a dedicated member of his church. He played softball for over 25 years as a catcher with the Catty S.A. Team. Joe bowled for many years; at Hampton Lanes during the week and with a traveling team on the weekends. He also attended many ABC, state and local tournaments. Joe was a member of the Hanover Township, Lehigh County Planning Commission for 25 years. Joe worked for 10 years from Opening Day for the Iron Pigs as an usher; something he enjoyed so much that he didn’t consider it a job. He was an active member and lector at Our Lord’s Ascension Polish National Catholic Church in Bethlehem. He served on the church council for many years; one year as President. Joe organized the Young Men’s Society of Resurrection for the men in the church, of which he was chairman, and the men ran a weekly bingo until the pandemic. Joe participated in every activity in his church from renovating the rectory, to making pierogi, traveling to the Scranton area for Kielbasi, and working at the fall and spring bazaars. Also, an avid Penn State fan, Joe had season tickets for more than 30 years, first attending with his young son, then his wife, and lastly a group of men. He was especially proud that his son attended Penn State. Joe had a special bond with Barkley, his furry friend, named after his favorite Penn State player. Nothing was more important to Joe than being with his family, his church friends, and the many friends from all of his activities. “To live in hearts we leave behind is not to die” -T. Campbell A visitation will be held on Tuesday, June 30, 2020 from 5-8 p.m. at The Connell Funeral Home, 245 E. Broad St., Bethlehem, PA 18018. CDC guidelines will be followed and a mask is required for entry. The service and entombment will be private. Memorial contributions may be made to Our Lord’s Ascension Polish National Catholic Church, 2105 Jennings St., Bethlehem, PA 18017.

Joseph Jurnock, 80, of Allentown, died on Saturday, June 27, 2020 at Phoebe Home. He was born in Taylor, PA; son of the late Joseph and Olga (Dowhy) Jurnock. Joe is survived by his devoted wife, Barbara Jean (Godek) Jurnock. They would have... View Obituary & Service Information

The family of Joseph Jurnock created this Life Tributes page to make it easy to share your memories.

Send flowers to the Jurnock family.