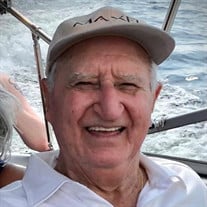 With inexpressible sorrow, we acknowledge the passing August 3rd at ManorCare Health in Easton, of an exemplary husband, father, grandfather, great grandfather, friend, faithful follower of our Lord, and Patriot, surrounded by those that he loved, as he was present for them his entire life. Born November 16, 1928 (John & Mary Balogh) in the very house where he spent his entire 92 years, Skip graduated from Bethlehem VoTech and soon joined the Army during the Korean Conflict, following the lead of his four brothers who served honorably during World War II. A passion for golf fanned as a young caddy saw him with an opportunity to turn pro after his discharge, but he declined in order to devote his full energy to his growing family. Instead, he became a brick mason, leading to his forming the Pleasant Valley Brick Company known for superb craftsmanship on tasks both large and small, on many hundreds of homes, condominiums and commercial buildings in the Lehigh Valley. During and after his work years he enjoyed playing golf locally and throughout the United States, fishing and hunting here and on his many enjoyable trips to Maine. He was a life-long member of the First Hungarian Zion Lutheran Church of Bethlehem, serving as Council President for 30+ years, lector, usher, handyman, and Communion Assistant for those homebound. He was also a member of the VFW, the Independent Citizens Club, the Roosevelt Democratic Association and he served faithfully as the Treasurer of the Bethlehem Township Municipal Authority for over 40 years. He delighted in time spent with his whole family, and relished the opportunity to help coach his grandsons in their sports activities. He was an avid Phillies and Eagles fan, and enjoyed attending their games when possible, but never missing a televised game. His ready smile, kindness, humorous comments and hearty laugh made him a popular guest and great company. He is survived by his loving wife of 65 years, Bettyjane Balogh, daughter Coleen and husband Fred Walther of Maine, his daughter and husband Sherry and Dale Mack of Easton, grandson Daniel Julius Higgins and partner Anastasia and their children James Julius and Margaret, grandson Thomas Higgins and Alexander and Abigail Mack, sister-in-law Patt and family and James Higgins, Jr., father of the grandsons. A calling hour will be held on Saturday, August 7, 2021 from 11 a.m. -12 p.m. at Connell Funeral Home, 245 E. Broad St. Bethlehem, PA 18018. A memorial service will follow at 12 p.m. in the funeral home. In lieu of flowers, the family would be grateful if you made a donation to: Operation Companion, Soldier Solutions, 60 Church Street, Suite 1-C, Wallingford, Connecticut 06492.

With inexpressible sorrow, we acknowledge the passing August 3rd at ManorCare Health in Easton, of an exemplary husband, father, grandfather, great grandfather, friend, faithful follower of our Lord, and Patriot, surrounded by those that he... View Obituary & Service Information

The family of Julius "Skip" Balogh created this Life Tributes page to make it easy to share your memories.

With inexpressible sorrow, we acknowledge the passing August...

Send flowers to the Balogh family.