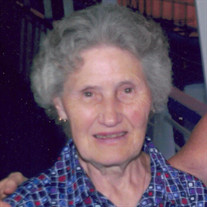 Patricia Wynnycky passed away Thursday, December 2, 2021, after a prolonged illness. She was 94. A longtime resident of Bethlehem, Patricia relocated to Florida in her final years where she lived with her daughter, Kathy, until her passing. Born in Central Ukraine on January 20, 1927, she was a survivor of Holodomor, the forced famine which killed millions of Ukrainians in the 1930s. During WWII, she was sent to Germany to work as forced labor. She met and married her husband, Stanley, during the war and subsequently immigrated to the US in 1949. She and her family initially arrived in Northeast Pennsylvania and eventually settled in Bethlehem where she lived for over 60 years. She raised three children, helped with four grandchildren, was active in church, and worked in the garment industry. Well-read and knowledgeable, Patricia maintained a bond with her Ukrainian heritage and respect for her adopted home in the US her entire life. She was preceded in death by her husband Stanley Wynnycky, son George Wynnycky, daughter Olga Wanitsky, and grandson Michael Wanitsky. She is survived by her daughter Kathy Wynn (Vero Beach, FL), grandson Rev. Thomas Walden (Melbourne, FL), grandson Jason Wynnycky (Arlington, VA), grandson Marcus Wynnycky (Sherman Oaks, CA), and great-granddaughter Sofiya Wynnycky. A visitation will be held at St. Josaphat’s Ukrainian Catholic Church, 1826 Kenmore Avenue, Bethlehem, PA 18018, on Monday, December 13, 2021, from 9:30am until the time of the Office of Christian Burial at 10:00am in the church. Interment will be in St. Josaphat’s Cemetery. Arrangements are under the care of the Connell Funeral Home, Inc., 245 East Broad Street, Bethlehem, PA 18018.

Patricia Wynnycky passed away Thursday, December 2, 2021, after a prolonged illness. She was 94. A longtime resident of Bethlehem, Patricia relocated to Florida in her final years where she lived with her daughter, Kathy, until her passing.... View Obituary & Service Information

The family of Patricia Wynnycky created this Life Tributes page to make it easy to share your memories.

Send flowers to the Wynnycky family.