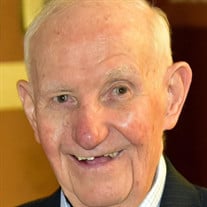 Paul Havrilko, 92, of Bethlehem, passed away on January 17, 2022, at Lehigh Valley Cedar Crest Hospital. Born on January 9, 1930 in Taylor, Pa., son of the late Viola (Borovicz) and Paul Havrilko. Paul is survived by his loving wife Dorothy Havrilko, they shared 70 wonderful years together. He is a graduate of Taylor High School. After high school, Paul went on to serve our country in the United States Army. He served in the Korean War 24th Division, 6th Tank Battalion-Company B and received The Good Conduct Metal and Korean Ribbon. Prior to retirement, he was employed at Affiliated Food for 25 years and later employed by Theis-Cornfeld Recycling Center. His many memberships included, Teamsters Local 229 and the Teamsters Retired Club. He was also a member of St. Nicholas Russian Orthodox Church, Bethlehem and Lincoln Heights American Legion-Post 920. Paul was a devoted husband, father, and grandfather. He enjoyed golfing with his wife and spending time with his family, they will miss him dearly. Preceding him in death are his parents and sister, Mary Romanowsky. He will be lovingly remembered by his wife, Dorothy; two daughters, Deborah (Michael) Slaboda and Judith (Nicholas) Lezinsky; one son, Paul “Skip” (AnnMarie) Havrilko; three sisters, Delores Bombicca, Lorraine (Ray) Makuswicz, and Gloria Sheridan; nine grandchildren and 11 great-grandchildren. In keeping with Paul’s wishes, services will be private and at the convenience of the family. In lieu of flowers, donations may be made to St. Nicholas Russian Orthodox Church, 980 Bridle Path Rd., Bethlehem, PA 18017.

The family of Paul Havrilko created this Life Tributes page to make it easy to share your memories.

Send flowers to the Havrilko family.