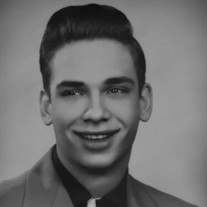 Richard "Dick" Olexa, 84, of Bethlehem, quietly departed this world on June 26, 2020, with his beautiful bride Aase at his side in the home they shared. Born in Bethlehem on October 2, 1935, he was the son of the late George and Rose (Henn) Olexa. For nearly six decades, Dick and Aase tried to dispel the rumors that theirs was a shotgun wedding and/or that there was a green card somehow involved. Let's just clear this up once and for all: It was, in fact, a fairytale romance of love at first sight, followed by a marriage proposal on their second date. They would have celebrated 60 years together on July 27. Dick graduated from Liberty High School in 1953 and served in the US Army from 1958-1960, where his marksmanship skills helped him attain the rank of Specialist E-4. Stationed in Germany, he met the love of his life on leave in his favorite city of Copenhagen, where he will soon make one last trip. Upon his discharge, he returned to Bethlehem to build a life with Aase and their children, where he worked as a Shipping Supervisor for Bethlehem Steel until his retirement. He was an avid outdoorsman and master fly fisherman, never failing to catch his limit on the beautiful trout streams of the Lehigh Valley. He was a gifted story teller, with a quiet humor and baritone laugh that will be sorely missed by family and friends. Dick will be greatly missed by his wife Aase (Johansen) Olexa and family, daughter Jacqueline and partner Steven Favorito; son Richard John, daughter-in-law Kristin (Nurminen) Olexa and beloved grandson Joshua; sister-in-law Paula (Ripper) Olexa and family, and the extended Olexa, Jablonski and Johansen families. He was predeceased by his loving nephew Scott Olexa, and the best little brother a man could have, James Olexa. His family is quite sure he is now at peace, having finally been exonerated of the infamous "rock" incident after more than 50 years. In accordance with his wishes, there will be no fanfare beyond a private family service. In lieu of flowers, memorial contributions may be made to Best Friends Animal Society (bestfriends.org).

Richard "Dick" Olexa, 84, of Bethlehem, quietly departed this world on June 26, 2020, with his beautiful bride Aase at his side in the home they shared. Born in Bethlehem on October 2, 1935, he was the son of the late George and Rose (Henn)... View Obituary & Service Information

The family of Richard Olexa created this Life Tributes page to make it easy to share your memories.

Send flowers to the Olexa family.