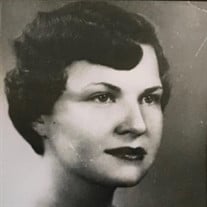 Sophia "Sonya" Check Kuritz, 90, of Fountain Hill, PA, peacefully passed away on September 21, 2021. She is survived by Maurice J. Kuritz, Sr., her husband of 62 years, and three sons. Born on the South Side of Bethlehem on March 12, 1931, in the shadow of the blast furnaces that dominated the skyline, Sonya was one of 14 children born to Agnes (Sirochy) and Michael Check, immigrants from Czechoslovakia. The Check family is a well-known part of Bethlehem Steel Company history as her father was a General Foreman at the company, and all nine of her brothers worked at the plant. Even young Sonya played a role; her father would dictate notes to her about the specifics of steel production that were to be given to Lehigh University engineering students, which she then translated from Slovak to English. With her lush, upswept hair, Sonya was a familiar presence as a sales associate at the Hess's/Bon-Ton store in the Westgate Mall, where she was employed for 45 years. She had a tremendous work ethic and was proud of the job she performed with reliability and care for decades. In fact, she was so dedicated that she owned an extra car in order to get to work in the event her car would not start. Sonya reluctantly retired from Bon-Ton at the age of 86, when she became ill, but it pleased her that many of her former customers recognized her at medical appointments across the Lehigh Valley. When Sonya was not at Bon-Ton, she was in constant motion at home; if she could not be reached by phone, she probably was wallpapering, trimming hedges, or doing other activities that required she be on a ladder. She ran her own clothing re-weaving business and also wove colorful rag rugs. Further, Sonya was an accomplished baker, specializing in kiffles, as well as poppy seed and nut rolls, which were in great demand by family members and co-workers. She was a woman of faith who spoke five languages, enjoyed listening to polka music, and was a fabulous dancer. Happily, her very last sentence was: "We're going dancing tonight!" Sophia Check Kuritz was a unique and unforgettable individual, who will be missed. In addition to her husband Maurice J. Kuritz, Sr., she is survived by sons: Gregory and wife Mary Ann Ardoline; Maurice, Jr. and Donna; Ronald and Jill. Grandchildren: Creeden, Laken, Tanner, Graylon, and Payton. She was pre-deceased by siblings: Stephen, John, Andrew, Michael, George, Francis, Emil, Bartholomew, Richard, Irene, Margaret, Veronica, and Mary. At the family’s request, services will be private. Arrangements are under the care of the Connell Funeral Home, Inc., 245 East Broad Street, Bethlehem.

Sophia "Sonya" Check Kuritz, 90, of Fountain Hill, PA, peacefully passed away on September 21, 2021. She is survived by Maurice J. Kuritz, Sr., her husband of 62 years, and three sons. Born on the South Side of Bethlehem on March 12, 1931,... View Obituary & Service Information

The family of Sophia Kuritz created this Life Tributes page to make it easy to share your memories.

Send flowers to the Kuritz family.