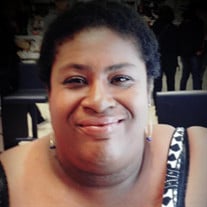 Tauheedah Pearson, 39, of Bethlehem, died on March 12, 2020. She was born in Jacksonville, NC; the daughter of Delores Chalmers and the late Isaac Bernard Pearson. Tauheedah will be lovingly remembered as a warm hearted, loving, young lady. She was very outgoing and was often greeting people with her unique laugh and beautiful smile. Tauheedah enjoyed movies; especially “Willow”, the color pink, watching Martin Lawrence, and listening to Michael Jackson. In her free time, Tauheedah enjoyed a good book or visiting the casino. Most recently Tauheedah spent her time as a bell ringer for The Salvation Army. The following are words written by Tauheedah from her Facebook page: Tauheedah identified herself as either “Ty” and Sunflowers Raindrop. She wrote that she was a “music lover….the type of person that can make you laugh, no more fake friends.” Tauheedah graduated from Rancho Buena Vista High School, in Vista, California, in June 2000. She attended Riverside Community College in 2006 and took up basic studies before moving to Bethlehem Pennsylvania. One of the things she loved to do was helping people. From 2010 to 2013, she worked at Recovery Partnership Drop-In Center. She was the drop in center assistant it was a socialization club for adults with mental illness. Her hobbies are cooking, watching TV, listening to music, and shopping. Tauheedah described herself as a Christian. Her favorite scripture is Romans 8:28, "And we know that all things work together for good to those who love God, to those who are the called according to His purpose." In everything give thanks." Her favorite quotes are- “What goes around comes back around” “God don’t like ugly”. Her dreams were to go back to school, learn how to open her own business, and live on her own as an independent adult. She will be dearly missed by her mother, Delores; sister, Latasha Jimerson; brother, Isaac Bilal Pearson; as well as her nieces, Ayana, Tiera, Brandi, and Inaya; her nephew, Ishmael and her extended family. Tauheedah will be missed by paternal grandmother, Cornelia Elijah; aunties, Deniece Chalmers, Katie Spencer, Wakeelah Mekki, Brenda Elijah, and Bridgette Cooper. Her uncles include David Chalmers, Yancy Spencer, Elijah Muhammad, Ben Elijah Jr, Tyrone Elijah, and Homer Stevenson. Her cousins include Breeana Chalmers, Vena Price, Stan Price, Malcolm, Brea, Nicole, Nicholas, Brandon, Landon, and Melody. Tauheedahs’s beautiful smile and kind heart will be missed tremendously by her fiancé, Josh and mother-in-law, Dorothy, as well as a host of relatives, co-workers, friends, and neighbors. Tauheedah was preceded in death by several family members including her father, Isaac Bernard Pearson, her auntie, Mevlyn Young, and her maternal grandmother, Vivian Delores Spencer and paternal grandfather Ben Elijah. Visitation and services will be private due to the restrictions on gatherings. Memorial contributions may be made payable to Delores Chalmers and used to offset the cost of funeral services via cash app to $DeloresChalmers.

Tauheedah Pearson, 39, of Bethlehem, died on March 12, 2020. She was born in Jacksonville, NC; the daughter of Delores Chalmers and the late Isaac Bernard Pearson. Tauheedah will be lovingly remembered as a warm hearted, loving, young lady.... View Obituary & Service Information

The family of Tauheedah Pearson created this Life Tributes page to make it easy to share your memories.

Send flowers to the Pearson family.