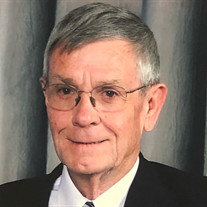 William E. Doyle, 80, of Bethlehem, died at home on October 15, 2021. He was born May 25, 1941 in Allentown, youngest child of the late Patrick and Mary (Pyke) Doyle. William is survived by his devoted wife of 54 years, Janet M. (Anthony) Doyle. William was a graduate of Central Catholic High School and proudly served in the US Navy as a member of the Commander U.S. 7th Fleet aboard the USS Saint Paul and USS Oklahoma City. He later attended Moravian College, and earned the Juris Doctor degree from Temple Law School. He was a trial attorney and general practitioner at the law firm of Donatelli and Doyle. William was a past president of the Lehigh County Bar Association and was recognized in 2020 for 50 years of service and membership. William will be lovingly remembered as a true gentleman; he was kind and loving and placed his family above all else in his life. William had wonderful years coaching baseball at Northwest Little League. He enjoyed spending time at his cabin where he found great peace in boating, fishing, and skiing. And William could often be found listening to his favorite crooner, Frank Sinatra. He will be dearly missed by his wife, Janet; children, William Doyle; Heather Bonomo and husband, Hernan; and Matthew Doyle; grandchildren, Alex, Ryan, Sebastian, and Luca; as well as his extended family and friends. William was preceded in death by his siblings, Kathleen, Margret, Jack, and Darryl. A visitation will be held on Tuesday, October 19, 2021 from 9-11 a.m. followed by a service at Connell Funeral Home, 245 E. Broad St. Bethlehem, PA 18018. In lieu of flowers, memorial contributions may be made to Alzheimer’s Association, 225 N. Michigan Ave., Fl. 17, Chicago, IL 60601.

William E. Doyle, 80, of Bethlehem, died at home on October 15, 2021. He was born May 25, 1941 in Allentown, youngest child of the late Patrick and Mary (Pyke) Doyle. William is survived by his devoted wife of 54 years, Janet M. (Anthony)... View Obituary & Service Information

The family of William E. Doyle created this Life Tributes page to make it easy to share your memories.

Send flowers to the Doyle family.