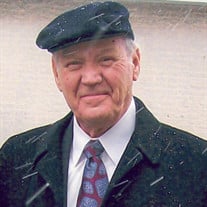 William “Bill” Pakulski, 96, of Bethlehem, formerly of Baltimore, died Sunday, November 1, 2020 at home. Born July 13, 1924 in Baltimore he was the son of the late William and Lillian (Friedel) Pakulski. His wife of 59 years, Bertha E. (Demski) Pakulski, died in 2007. The oldest of 7 siblings, most people thought of Bill as a force of nature, always willing and able to help others, especially when it came to fixing things. He was pretty much self-educated and achieved much in his professional and personal life. He was employed by Bethlehem Steel, starting in the Sparrow’s Point Plant in 1948, moving to Bethlehem, Burns Harbor and back to Bethlehem throughout his career. He retired from Bethlehem Steel in 1982 after 34 years of service as an Electrical Project Engineer, having provided expertise in all phases of electrical maintenance, construction, design, and management of steel mill related projects. He then spent another decade doing private consulting for several Engineering Firms, most notably James P. Driscoll, Inc. Bill was a veteran of the U.S. Army Air Force, having served in WWII as an aerial engineer. He was awarded the Air Medal for duty while serving as combat crew member of Troop Carrier Command over Germany. Years ago, Bill belonged to Saucon Valley Country Club and later Sparrows Point Country Club, where he was very active with the golf program. Over the years he enjoyed hunting and fishing. He was also a very talented woodcrafter and gardener. After moving back to Bethlehem in 2013 he volunteered with his daughter for several years at the Boutique at the Rink. He loved his country and his family. Bill will be greatly missed by his devoted daughter Jan, wife of Gene Connell, his grandson Owen Connell and his girlfriend Jennifer Bruner and her children, Grace and Ian, his granddaughter Katie and her husband Adam Schnug and his great grandchildren Aidan, Ian, Ella and Ava Connell and Michael and Russell Schnug, as well as his sister Joan Ringger, and brothers Donald, Carl (Bunky), Robert and Richard. He was predeceased by a brother Edward (Ken) in 2017. Also surviving is Evelyn Reph, Bill’s love and best friend for the last several years, who has been a wonderful addition to the family. Funeral services will be Saturday, November 7 at 11:30 am at Connell Funeral Home, 245 E. Broad St. Bethlehem, PA 18018. A calling hour, 10:30 – 11:30 am, will precede the service. Interment with military honors will follow at Holy Saviour Cemetery. Please direct memorial contributions to St. Luke’s Hospice c/o Development Office, 801 Ostrum St., Bethlehem PA, 18015.

The family of William Pakulski created this Life Tributes page to make it easy to share your memories.

Send flowers to the Pakulski family.