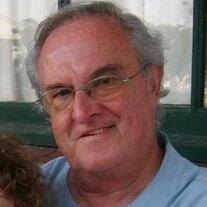 William (Bill) L. Johnson, 79, of Northampton and formerly of Bethlehem Township passed away in his home on Sunday, January 9, 2022. Born on January 5, 1943 in Kearny NJ, he was the son of the late William E. and Helen (née Koller) Johnson and brother of Alice Johnson. He was the loving husband of the late Lorraine A. (née Schofield) Johnson, with whom he spent 47 years. Bill grew up in Kearny, NJ in a setting he described as "being much like the movie Stand By Me." A product of the Catholic Parochial school system, he was a 1961 graduate of St. Cecilia's High School. He fondly recalled his years in Catholic school in the 1940s and 1950s as not just providing him with a good education, but also a lifelong fear of nuns. In 1961, he enlisted in the United States Air Force and served a tour in Vietnam as a crewmember on C-123 aircraft as part of Operation Ranch Hand. A recipient of the Air Medal for bravery, his plane was among the most shot at planes of the Vietnam war, and is commemorated and displayed in the National Museum of the U.S. Air Force in Dayton, OH. The plane is nicknamed "Patches" due to the myriad of patches on the plane to repair bullet holes after each mission. He achieved the rank of Sergeant and completed his service in 1965. He was proud to have served his nation and was pleased to see the increased appreciation and recognition for veterans over the years. Following his service in Vietnam, Bill began working at Prudential Insurance. Armed with an incredible work ethic and a strong aptitude for the then burgeoning area of computers and data management, he quickly advanced at Prudential, then other insurance companies and disaster recovery firms, retiring in 2006 from Sungard Data Systems in Philadelphia. He is fondly remembered by those he worked with and managed over the years, and his management philosophy was "Family First." In 1967, he made the best choice of his life and decided to ask Lorraine Schofield to dance at a mutual friend's wedding. That bit of bravery led to marriage, four somewhat handsome boys, moves to New Jersey, Minnesota, and Pennsylvania, four dogs, three very beautiful daughters-in-law, years of hearing "WILLIAM LEO" while being scolded by his wife, five incredible grandchildren, more nieces, nephews, and cousins than we can list, and…well, really, the results of life well-lived. A football fan, Bill was a lifelong New York Giants and Jets fan…somewhat begrudgingly in recent years. He enjoyed a good cocktail hour, a party with his family by the pool, boxed wine (shoutout to Peter Vella), conservative politics, and time with his grandchildren. But when he was most happy was when he was sitting with Lorraine on the couch after a long day, watching TV, and just enjoying each other. William…Bill…Billy will be remembered differently by the family, friends, and acquaintances he knew through his 79 years. The one memory each of them will share is Bill's sense of humor and his distinctive laugh. From puns to double entendre, pranks to witty one liners, Bill loved to share a laugh with the people in his life. He will be lovingly remembered by his sons, Kevin W. and his wife, Shannon (Gilroy) of Attleboro, MA, Paul E. and his wife, Shaun C. (Werner) of Hatfield, PA, Sean A. and his wife, Brooke L. (Biacco) of Northampton, PA and Ryan P. of Bethlehem, PA; sister, Alice Johnson; sister-in-law, Marilyn (Schofield) Staub; grandchildren, Caitlin Anne, Aedan William, Quinn Sophia, Owen Michael, and Leo Samuel John and many nieces, nephews, and cousins. At the request of the family, those that are vaccinated are welcome to join them for a viewing on Sunday, January 16, 2022 from 1-3 p.m. ET at Connell Funeral Home, 245 E. Broad St. Bethlehem, PA 18018. A funeral service will follow at 3 p.m. ET in the funeral home. Those that are unable to attend, may do so virtually, using the link that will be on William's memorial page on www.connellfuneral.com In lieu of flowers, memorial contributions may be made to the Wounded Warrior Project 4899 Belfort Rd. Suite 300 Jacksonville, FL 32256 (www.woundedwarriorproject.org) The link to the live feed of the viewing and service will start at 1 p.m. on Sunday. Time: Jan 16, 2022 01:00 PM Eastern Time (US and Canada) Join Zoom Meeting https://us02web.zoom.us/j/82365830886?pwd=dTJGNG1EWnNvbFdGWjJpQjF3ZXJKQT09 Meeting ID: 823 6583 0886 Passcode: 442007 One tap mobile +13017158592,,82365830886#,,,,*442007# US (Washington DC) +13126266799,,82365830886#,,,,*442007# US (Chicago) Dial by your location +1 301 715 8592 US (Washington DC) +1 312 626 6799 US (Chicago) +1 646 558 8656 US (New York) +1 253 215 8782 US (Tacoma) +1 346 248 7799 US (Houston) +1 669 900 9128 US (San Jose) Meeting ID: 823 6583 0886 Passcode: 442007 Find your local number: https://us02web.zoom.us/u/keurRdQNA2

William (Bill) L. Johnson, 79, of Northampton and formerly of Bethlehem Township passed away in his home on Sunday, January 9, 2022. Born on January 5, 1943 in Kearny NJ, he was the son of the late William E. and Helen (née Koller) Johnson and... View Obituary & Service Information

The family of William L. Johnson created this Life Tributes page to make it easy to share your memories.

William (Bill) L. Johnson, 79, of Northampton and formerly of...

Send flowers to the Johnson family.