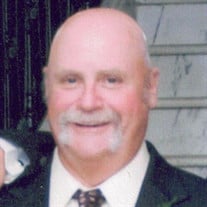 Carl G. "Chopsie" Morgan, Jr., 69, passed away on September 23, 2021 with his family by his side. Chopsie was born on March 26, 1952 in Bethlehem, PA; son of the late Carl G. Morgan Sr. and Adele (Mantz) Morgan. Chopsie is survived by his devoted wife of nearly 45 years, Terri Lee (Metz) Morgan. Chopsie was a graduate of Liberty High School. He worked for the Bethlehem Steel Corp., MFS Manufacturing, and Reeb Millwork prior to his most recent position as a custodian for the Bethlehem Area School District. He was an avid outdoorsman and had a passion for hunting and fishing. Chopsie was a member of Monocacy Field and Stream Club. He was a Philadelphia sports fan and enjoyed watching Penn State football. Chopsie will be dearly missed by his wife, Terri; son, Carl G. Morgan, III and wife, Brianne; grandchildren, Connor and Emily; brother, John Morgan and wife, Barbara; and sisters, Marylou Anderson, Carol DeAngelis, Linda Hubbs and husband, Cliff, and Debbie Geiger and husband, Larry; and their families. He was preceded in death by his son, David L. Morgan. Friends and family will be received on MONDAY, September 27, 2021 from 5-8 p.m. at Connell Funeral Home, 245 E. Broad St. Bethlehem, PA 18018. A service to celebrate Chopsie's life will be held 10 a.m. on WEDNESDAY, September 29, 2021 in the funeral home. Guests will have an opportunity to share a memory during the service. Burial will follow at Bethlehem Memorial Park. Memorials may be made to VNA of St. Luke's Hospice, c/o Development, 801 Ostrum St. Bethlehem, PA 18015.

The family of Carl George Morgan, Jr. created this Life Tributes page to make it easy to share your memories.