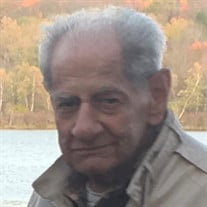 Charles F. Schubert, 87, of Bethlehem Township, passed peacefully in his home on Monday, December 7, 2020. Born February 18, 1933 in Saint Joseph, MO, he was the son of the late Leveta (Neff) Schubert Mackowiak and Marvin F. Schubert, Sr. Charles was married to Constance “Connie” (Ammend) Schubert with whom he celebrated 64 years of marriage this past October 6th. Charles worked as a police officer in Bethlehem Township retiring as a sergeant after 21 years of service. He also was the owner operator of Schubert’s A+ Mini Market in Nazareth. Charles was an accomplished wood worker and enjoyed hunting and fishing. Charles proudly served his country in the US Navy during the Korean War. He was a 4th Degree Knight in the Knights of Columbus and a loyal member of Sacred Heart Catholic Church in Miller Heights. Charles will be lovingly remembered by his beloved wife, Connie, children: daughter Laurie Dougherty and husband Dennis, son Robert and wife Susan, and daughter Susan Creyer and husband Kevin grandchildren: Matt, Stephanie, Kaitlyn, Randy, Patrick, Kayla, Jason, and Henry, and two great grandchildren, Miles and Zachary. He was predeceased by his son, Charles Schubert, Jr., brothers: Marvin Schubert, Jr. and James Schubert, and sisters: Mary McGee and Betty Kenny. A viewing will be held on Saturday, December 12, 2020 at Sacred Heart Catholic Church, 1817 First St., Bethlehem, PA 18020 from 10-11 AM followed by a Mass of Christian Burial at 11 AM. Burial will follow at Holy Saviour Cemetery. Arrangements Connell Funeral Home. Memorial contributions may be made in Charles’ name to Sacred Heart Catholic Church.

The family of Charles F. Schubert created this Life Tributes page to make it easy to share your memories.

Send flowers to the Schubert family.