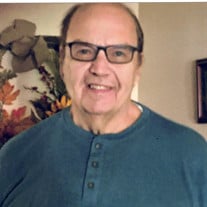 Dennis J. Hlavaty, 70, of Salisbury Twp., PA, passed away on Wednesday March 2, 2022 at St. Luke’s Hospital in Foutain Hill, PA. He was born in Allentown, PA, the son of the late Joseph and Veronica (Grazulis) Hlavaty. He was the husband of Elaine (Tulba) Hlavaty and they were married for 39 years. Dennis was a graduate of Central Catholic High School 1970, Pierce Jr. College 1972, Penn State Capital Campus 1974, and Northampton Community College 1993 where he received his RN in nursing. Dennis served his country in the US Air Force. He worked as a psychiatric nurse for the state of New Jersey and St. Luke’s Hospital in Quakertown. He was an avid animal lover and also shared many years with his wife following football and baseball, Dennis rooting for the Eagles and Phillies, and Elaine, the Braves and Seahawks. Even though the teams were great rivalries , he always gave Elaine his utmost support. He will be lovingly remembered by his wife, Elaine, step-son, Brian Trumbower of Vero Beach, Florida, granddaughter, Sage, and his beloved terrier, Mitzi. A viewing will be held from 6-8pm Tuesday March 8, 2022 at the Connell Funeral Home 245 E. Broad St. Bethlehem, PA 18018 with a prayer service at 6pm and Wednesday from 9:30-10:30am at the Connell Funeral Home followed by a funeral service at 11am at Ss. Peter & Paul Byzantine Catholic Church 1140 Johnston Dr. Bethlehem, PA 18017. Burial will be held at Hellertown Union Cemetery. Memorial contributions may be made to the Lehigh County Human Society 640 Dixon St. Allentown, PA 18103, or Animal Food Bank of Lehigh Valley 860 Broad St. Emmaus, PA 18049, or Animals in Distress Box 609 5075 Limeport Pike Coopersburg, PA 18036.

Dennis J. Hlavaty, 70, of Salisbury Twp., PA, passed away on Wednesday March 2, 2022 at St. Luke&#8217;s Hospital in Foutain Hill, PA. He was born in Allentown, PA, the son of the late Joseph and Veronica (Grazulis) Hlavaty. He was the husband... View Obituary & Service Information

The family of Dennis J. Hlavaty created this Life Tributes page to make it easy to share your memories.

Send flowers to the Hlavaty family.