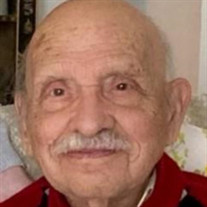 Ennio B. Maccini, passed away Saturday January 1, 2022 at St. Luke’s Hospital-Anderson Campus, Born July 27, 1927 to Emilio & Camilla (Marchesi) Maccini in Bardi, Italy, Ennio grew up in the small mountain town of Bore, Italy and later moved to Milan before immigrating to the United States in the late 1950s. He settled in Jersey City, NJ and worked as a master tailor for Evan-Picone, where he met his wife Angela (Grillo) whom he married in 1960. For the last 20 years, they had been living in Bethlehem, PA where they were members of OLPH parish. Throughout his life, he enjoyed making clothes for his family, traveling, and watching baseball. His greatest joy was spending time with his family, especially his grandson, Brian. Ennio was pre-deceased by brothers, Franco, Sergio & Giulio and is survived by wife Angela, daughter Ann Marie & her husband Doug McKenzie, and grandson Brian. A viewing will be held on Thursday, January 6, 2022 at Our Lady of Perpetual Help Church, 3219 Santee Rd., Bethlehem, PA 18020 from 10-11 AM followed by a Mass of Christian Burial at 11 AM. Burial will be at Holy Cross Cemetery in North Arlington, NJ.

The family of Ennio B. Maccini created this Life Tributes page to make it easy to share your memories.

Send flowers to the Maccini family.