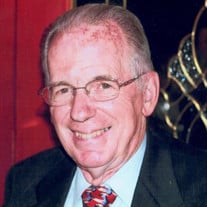 Gerald W. Matla, 79, of Upper Saucon Township and West Palm Beach, Florida, passed away on March 12, 2022. He was the husband of the late Joann (Chrobocinski) Matla, who passed away in 1997, and the companion of the late Georgine (Domyan) Kelhart, who passed away in 2011. Gerry was born in Allentown, PA, to the late Frank and Stella (Rudnicki) Matla, Sr. Gerry was a graduate of Liberty High School (vocational department) Class of 1960 and attended Penn State University. He was employed by Ingersoll Rand Co., Phillipsburg, NJ, Western Electric Co., and AT&T Bell Laboratories, Allentown. He retired from Agree Systems in 2001 as a specification engineer. He was a musician (leader of his own band) and former member of the American Federation of Musicians Local 45 of Allentown. He enjoyed hunting and fishing and was a member of Unimi Fish and Game of Emmaus, PA. Gerry serviced his country in the U.S. Army during the Vietnam Era and was stationed at Ft. Bragg, NC. He was active in his church, Our Lord’s Ascension Polish National Catholic Church, as past president of the parish counsel, vice president of the Men’s Society of Resurrection and sang in the church choir. One of the highlights of Gerry’s life was going to Poland in 2018 and visiting the city of Wadowice, where his grandparents came from. He will be lovingly remembered by his brother Frank F. Matla, Jr. and his wife, Janet, of Bethlehem; nieces and nephew; and his companion’s family who were very dear to him. A visitation will be held at the Connell Funeral Home, Inc., 245 East Broad Street, Bethlehem, on Monday, March 28, 2022, from 10:00am, until the time of the funeral service at 11:00am, in the funeral home. Interment will be in the Union Cemetery of Hellertown, with military honors. In lieu of flowers, memorial contributions may be made to Our Lord’s Ascension PNCC, 2105 Jennings Street, Bethlehem, PA 18017, and VNA St. Luke’s Hospice, c/o Development Office, 801 Ostrum Street, Bethlehem, PA 18015.

Gerald W. Matla, 79, of Upper Saucon Township and West Palm Beach, Florida, passed away on March 12, 2022. He was the husband of the late Joann (Chrobocinski) Matla, who passed away in 1997, and the companion of the late Georgine (Domyan) Kelhart,... View Obituary & Service Information

The family of Gerald W. Matla created this Life Tributes page to make it easy to share your memories.

Send flowers to the Matla family.