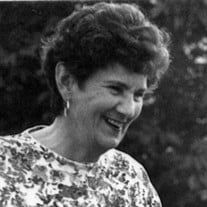 Goldie Gregoria Vass, 95, died peacefully on January 26, 2021. Born in Bethlehem on August 30, 1925, she was the daughter of the late George and Julia (Semenek) Gaul. She was a member of St. John Capistrano Roman Catholic Church (Altar and Rosary Society) and St. Anne’s where she was active in both choirs and acted as greeter to guests. She also sang with the NCCC choral group. She graduated from Bethlehem High School. Goldie worked as a lifeguard at Saucon Park, a psychiatric aide at Allentown State Hospital, and a teacher’s aide for the I.U. #20. Loving children, she went back to school and received her Bachelor of Science degree in Special Education from East Stroudsburg University at the age of 50 and completed her Master’s Degree from Lehigh University two years later. After graduating from college, she was employed as a classroom teacher and later as an educational consultant for Intermediate Unit #20. Upon retirement, she volunteered for the Bethlehem Chamber of Commerce, the Historic Bethlehem Partnership, the Bethlehem Garden Club and St. Luke’s Hospital. She continued her love of music singing with the St. Luke’s Singers and the Cathedral Choral Society. Goldie will be lovingly remembered for her love and care of her family extending from her children to her grandchildren to her great grandchildren. She was married for 61 years to the late John Vass who preceded her in death in 2008. She is survived by her son, Jack Vass (Louise) of Allentown, daughter, Jan Vass of Selinsgrove; four grandchildren, Kimberly Vass-Mitch of Belvedere, NJ, Scott (Katie) Vass of Harleysville, PA, Kevin (Heidi) Vass of Thousand Oaks, CA, and Christen Hoey (Dr. Brian) of Emmaus, PA; and nine great-grandchildren, Tucker Mitch, Aidan Vass, Graeme Mitch, Nadia Vass, Cami Stehly, Maeve Stehly, Lucas Ninic, Ben Vass and Sydney Vass. She was preceded in death by sisters, Helen Auer, Julia Horwath, Ethel Chuday, Mary Culligan and brothers, Geza Gaul, Anthony Gaul and William Gaul. A viewing will be held on Thursday, February 4, 2021 from 10-11 a.m. at St. Anne’s Church 450 Washington Ave. Bethlehem, PA 18017. A Mass of Christian Burial will follow at 11 a.m. Burial will be held at Holy Saviour Cemetery. In lieu of flowers, memorial donations may be made in her honor to St. Anne’s Church.

Goldie Gregoria Vass, 95, died peacefully on January 26, 2021. Born in Bethlehem on August 30, 1925, she was the daughter of the late George and Julia (Semenek) Gaul. She was a member of St. John Capistrano Roman Catholic Church (Altar and... View Obituary & Service Information

The family of Goldie G. Vass created this Life Tributes page to make it easy to share your memories.