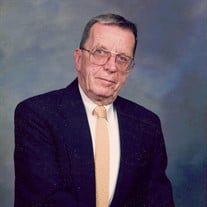 James V. Mooney, 90, of Bethlehem died Saturday, September 5, 2020 at Good Shepherd Specialty Hospital in Bethlehem. Born July 19, 1930 in Bronx, NY he was the son of the late James and Annie (Noone) Mooney. He was married to the late Elizabeth (Horgan) Mooney with whom he would have celebrated their 60th anniversary this past August 27th. Jim worked and retired from Consolidated Rail Corporation as an accountant. He was a graduate of Fordham University. He proudly served his country in the U.S. Navy during the Korean War. Jim was a member of Ss. Simon and Jude Catholic Church in Bethlehem where he was very active, volunteering much of his time. In addition, Jim was honored for his outstanding volunteer hours at Holy Family Manor. He was also a member of the Knights of Columbus and the Ancient Order of Hibernians. Jim could be known for having a green thumb. He was extremely devoted to his family and family always came first. He will be lovingly remembered by his daughters, Karen Dancho wife of Robert of Bethlehem, Maribeth Mooney of Manhattan, NY and Carol Domzalski wife of Matthew of Bethlehem Township, sister, Mary Agnes Klein, brother, Francis Mooney and 6 grandchildren and 7 great grandchildren. He was predeceased by his granddaughter, Emily Laura Domzalski, son, Gerald Mooney and brother Reverend Brother Lawrence Jude Mooney. A viewing will be held on Friday, September 11, 2020 at Connell Funeral Home, 245 E. Broad St., Bethlehem, PA 18018 from 5-7 PM. Another viewing will be held on Saturday at Ss. Simon Jude Catholic Church, 730 W. Broad St., Bethlehem, PA 18018 from 9-10 AM followed by a Mass of Christian Burial at 10 AM. Burial will be at Holy Saviour Cemetery. Masks are required and there will be limited occupancy in the funeral home. In lieu of flowers memorial contributions may be made in Jim’s name to Ss. Simon and Jude Catholic Church or to the Irish Christian Brothers c/o Edmund Rice Christian Brothers Foundation, 260 Wilmot Road, New Rochelle, NY 10804-1526.

James V. Mooney, 90, of Bethlehem died Saturday, September 5, 2020 at Good Shepherd Specialty Hospital in Bethlehem. Born July 19, 1930 in Bronx, NY he was the son of the late James and Annie (Noone) Mooney. He was married to the late Elizabeth... View Obituary & Service Information

The family of James V. Mooney created this Life Tributes page to make it easy to share your memories.

Send flowers to the Mooney family.