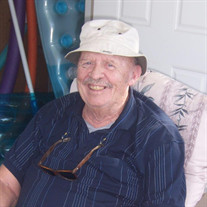 John J. Norton, Jr., 91, of Bethlehem Township died Saturday, June 13, 2020, at Country Meadows in Bethlehem. John was born on January 15, 1929, in Boston, MA, the son of the late Ann (Fallon) and John J. Norton. John moved to Brooklyn, NY, as a child. He lived on Long Island, in North Carolina, and then in Florida before moving to Pennsylvania. John worked in New York City as a policeman and as a fireman. He went to college to become a teacher and then a principal in the Uniondale Free School District on Long Island so he would have more free time to spend with his young family. John also worked as a collegiate football referee, a swimming official, and a day camp director. After retiring as a principal John became a licensed boat captain and moved boats up and down the east coast. John proudly served his country in the US Marines. He was a member of the US Navy swim team. John was adventurous and liked to sail and travel. Most people who knew John would agree he was “a character,” but above all and no matter where he went, John deeply loved his family. He was dedicated to the love and support of his family and found great joy in following the accomplishments of his grandchildren. John will be lovingly remembered by his daughter Pamela Norton-Seitz and her husband Jack Seitz of Bethlehem Township, his daughter Alison Norton-Siefert of West Babylon, NY, his daughter-in-law, Denise Norton of West Islip, NY, his 14 grandchildren and his 3 great grandchildren. He was preceded in death by his son, John J. Norton, III. Due to the pandemic and government restrictions services will be private. Arrangements by Connell Funeral Home. In lieu of flowers memorial contributions may be made in John’s name to Wounded Warriors Family Support, 11218 John Galt Blvd., Suite 103, Omaha, NE 68137.

The family of John J. Norton Jr. created this Life Tributes page to make it easy to share your memories.

Send flowers to the Norton family.