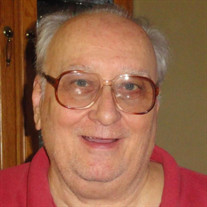 Joseph F. Bobal, Jr., 74, of Bath, died on Tuesday June 8, 2021. He was born in Bethlehem, Pennsylvania; son of the late Joseph F. Bobal Sr. and Kathleen (Hahn) Bobal. Joseph was preceded in death by his wife of 36 years, Ruth Ann (Rataczak) Bobal in 2010. Joseph was a wonderful example of how to live. He will be remembered for being kind, selfless, and hardworking. Joe was gregarious and loved spending time with his family; he often could be found spoiling his great nieces and nephews. Joe was very proud of his extensive model train collection and was also a member of the Hellertown Sportsman Club. Joe was a graduate of Fountain Hill High School in 1965. He proudly served in the US Navy from 1965-1969. Joe worked for decades and eventually retired from Kraft Foods. He will be dearly missed by his daughter, Joelle Ingallinera (Christopher); aunt and godmother, Dolores Kinney; brother James Bobal (Jessica); sister, Dorothy Krize; nieces, Tara Cavalline (Matthew), Megan Runkel (James), Jaimee Wagner, and Aleen Bobal (Jen); nephews, Andrew Bobal (Sarah) and Nicholas Shemonsky (Ashley); great nieces, Avery, Quinn, Harper, Dakota, Briar, and Emry; and great nephews, Evan, Trip, Parker, and Max; and many cousins and close friends. Family will receive friends at Connell Funeral Home, 245 E. Broad St. Bethlehem, PA 18018 on Tuesday, June 15, 2021 from 9-11 a.m. with a service to follow at 11 a.m. Interment will be held at Holy Saviour Cemetery Mausoleum. Joe’s love of trains has led us to have all memorial donations go to Wanamaker Kempton and Southern Railroad. Checks can be made to W.K. & S., Inc., P.O. Box 24, Kempton, PA 19529, in his memory.

The family of Joseph F. Bobal Jr. created this Life Tributes page to make it easy to share your memories.

Send flowers to the Bobal family.