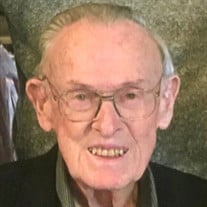 *UPDATE: The services to celebrate the life of Kenneth Simmons have been postponed until further notice. Please feel free to call the funeral home with any questions. Kenneth D. Simmons, 94, of Springtown, PA, died suddenly on Monday, February 24, 2020, doing what he loved to do – out walking and working on the property known as Far Horizons where he had lived since 1980. He was the loving husband for more than 70 years of his high school sweetheart, Sue (Ashby) Simmons, by whom he was predeceased in 2017. Ken (Kenny to his many friends) was born in Berea, WV, the son of the late Luther and Opal (Prunty) Simmons. Upon graduating from Pennsboro (WV) High School in 1943 and the day before his 18th birthday, he enlisted in the United States Navy, becoming a naval pilot trained to fly off of aircraft carriers. After the war, he married in 1946 and graduated from Marietta College in 1948 with a chemistry degree. Soon thereafter, he began a nearly 60-year distinguished career in the cement and building materials industry, starting as a plant chemist and rising to become the chief executive officer of two of the world’s largest cement companies, Universal Atlas and Lehigh Cement. Ken and Sue and their family lived in Marietta, OH, Martinsburg, WV, New Canaan, CT, Severna Park, MD, Allison Park, PA, Tampa, FL and ultimately Springtown, PA. Wherever they lived, Ken was involved in coaching youth sports, community activities and church life. He was an avid golfer and sportsman, having been inducted into his alma mater’s baseball hall of fame as an accomplished catcher for the renowned Marietta College baseball program. Ken was also an avid gardener, loving the entirety of sowing, tending, reaping and, especially, sharing the harvest with his neighbors. He loved the hills and valleys and people of Upper Bucks County and, in his later years, dedicated himself to such organizations as the Springtown Water Authority and the Cooks Creek Conservancy whose work is credited with preserving the natural beauty of this pocket of Pennsylvania. He traveled widely for business and pleasure, along the way co-leading trade delegations to China and the Soviet Union, and establishing a cherished two decades-long working relationship with the leading Costa Rican cement company, this after he had supposedly “retired” from the profession he so loved. Nevertheless, throughout his life he remained very proud of his West Virginia roots. Above all, he found his greatest pride and satisfaction in his family’s happiness and their love for each other. Ken was intensely loyal, vibrant, generous, practical but always with a young-at-heart, dreamer’s belief in the possible. Ken will be lovingly remembered by his children: Kathy Simmons and husband, Ron Scherer, of New York City; Linda Cameron and husband, Douglas, of Bethlehem, PA; Kenneth “Chip” Simmons, Jr. and wife, Judy, of West Chester, PA; and Scott Simmons and wife, Stephanie, of Hinsdale, IL; and his adoring five grandchildren (Taylor Cameron, Hadley (Cameron) Kreitz, Jessica (Simmons) Boyer, Melanie Simmons and Sophie Simmons) and five great-grandchildren (Lilah and Lucas Boyer, Una and Saer Kreitz and Quinn Cameron). Ken is also survived by his brother, Jack, of Marietta, OH. He was predeceased by his sister, Betty McIntyre, and brother, Larry Simmons. The family has requested that, in lieu of flowers, donations be sent to Marietta College Baseball, 215 Fifth Street, Marietta, OH 45750, noting “in honor of Ken Simmons”.

*UPDATE: The services to celebrate the life of Kenneth Simmons have been postponed until further notice. Please feel free to call the funeral home with any questions. Kenneth D. Simmons, 94, of Springtown, PA, died suddenly on Monday, February... View Obituary & Service Information

The family of Kenneth Dale Simmons created this Life Tributes page to make it easy to share your memories.

*UPDATE: The services to celebrate the life of Kenneth Simmons...

Send flowers to the Simmons family.