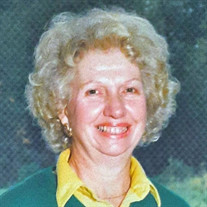 Mary Elizabeth “Betty” Wellner, 91, of Bethlehem, PA passed away on Sunday May 2, 2021 at Saucon Valley Manor in Hellertown, PA. She was born in St. Clair, PA, the daughter of the late Robert and Helen (Mitchell) Scanlan. She was the wife of the late Robert F. Wellner. Betty Wellner graduated from St. Clair High School in 1947 and from St. Joseph's College of Emmitsburg, MD in 1952 with a B.A. In Business and Education. Upon graduation she took a position in the Library of Congress in Washington, D.C. She married High School sweetheart Robert Wellner in December of 1952 and later moved to Key West Florida, where Robert was stationed as a U.S. Navy Submarine Lieutenant. In 1954 the two re-located to Bethlehem where Bob took a job at Bethlehem Steel. In addition to rearing their 4 children, Betty worked as a teacher of Typing and Shorthand and as a substitute teacher. She enjoyed playing golf for 4 decades at Saucon Valley Country Club, volunteered at St. Luke's Hospital, was a lifelong member of the American Association of University Women and a founding member of Notre Dame Catholic Church. When Robert retired from Bethlehem Steel and became Senior Vice President for the Figg Engineering Group, Betty forged a new avenue in her life, traveling with her husband to business meetings and conferences. In her later years she enjoyed her family and grandchildren, and meeting new people at Saucon Valley Manor in Hellertown, where she lived for 4 years. She will be lovingly remembered by her son, Dr. Robert L. Wellner and wife Tanya Milask of Bethlehem, daughters, Maureen Wellner and husband Thomas Lennon of Philadelphia, Teresa Morrissey of Murrells Inlet, SC, and Mary Louise Aubrey and husband Ralph of Washington DC, grandchildren, Robert Morrissey, Claire Lennon, and Harrison Wellner. She was predeceased by brothers, Robert Scanlan, and Daniel Scanlan. A calling hour will be held from 9:30am-10:30am Monday May 10, 2021 at the Connell Funeral Home, 245 E. Broad St. Bethlehem, PA followed by a service at 10:30am at the funeral home. Burial will be held at Holy Saviour Cemetery. In lieu of flowers, contributions may be made to Notre Dame of Bethlehem Catholic Church.

Mary Elizabeth &#8220;Betty&#8221; Wellner, 91, of Bethlehem, PA passed away on Sunday May 2, 2021 at Saucon Valley Manor in Hellertown, PA. She was born in St. Clair, PA, the daughter of the late Robert and Helen (Mitchell) Scanlan. She was... View Obituary & Service Information

The family of Mary E. Wellner created this Life Tributes page to make it easy to share your memories.

Send flowers to the Wellner family.