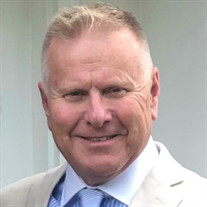 Dear friends, During this Blessed Christmas season may God grant peace, love, health and comfort to all of our beloved friends near and far. Michael would love you to “Google It Up” and share in one of his Christmas joys. http://smarturl.it/LittleDrummerBoyLive With love and gratitude, Mike and Jud In Loving Memory of Michael John Conway Michael John Conway, 66, formerly of Bethlehem died on Sunday, December 20, 2020 at his home in Lewes, DE with his loving family by his side. He was born February 21, 1954 in Patterson, NJ; son of the late Martin J. and Carol A. (McKelvey) Conway. Michael is survived by his devoted wife of 43 years, Judy K. (Cook) Conway. Michael was a graduate of Temple University, where he earned a Master of Science degree in Exercise Physiology. He was able to focus his passion for health and fitness into his career as Director of Exercise and Sports Performance for St. Luke’s University Health Network. Regarded as the founding father of fitness in the Lehigh Valley, Michael lived and breathed his passion for health and fitness, training countless athletes encompassing all levels. Michael’s knowledge and dedication to each person he encountered was second to none. His true love however is his family, which was no secret to all those who knew him. He will be dearly missed by his wife, Judy; daughters, Kristen N. Conway-Bedics wife of Patrick J., Hillary A. Rogers wife of Corey D., Courtney M. Conway wife of Charles J. Birk, and son, Stephen M. Conway; and grandchildren, Sophia K. Bedics, Patrick M. Bedics, Michael J. Bedics, Luca M. Bedics, Haylie E. Rogers, and Claire G. Rogers, loving brother Brian J. and sister-in-law Debbie Conway. Arrangements have been entrusted to Connell Funeral Home. A Mass of Christian Burial will be celebrated 11:00 AM on January 16th, at Our Lady of Perpetual Help Catholic Church, 3219 Santee Rd., Bethlehem, PA 18020. UPDATE: Inurnment will be private. At the request of the family, in hope to save others from battling this harrowing illness, in lieu of flowers, donations may be made to The University of Pennsylvania Abramson Pancreatic Cancer Research Center, in memory of Michael J. Conway. https://giving.apps.upenn.edu/fund?program=MC&fund=840853

Dear friends, During this Blessed Christmas season may God grant peace, love, health and comfort to all of our beloved friends near and far. Michael would love you to &#8220;Google It Up&#8221; and share in one of his Christmas joys. http://smarturl.it/LittleDrummerBoyLive With... View Obituary & Service Information

The family of Michael John Conway created this Life Tributes page to make it easy to share your memories.

Dear friends,
During this Blessed Christmas season may God grant...

Send flowers to the Conway family.