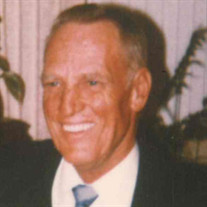 Robert H. Clark, Sr., 89, of Bethlehem, PA, passed away peacefully on Monday, July 12, 2021, at Lehigh Valley Muhlenberg Hospital. He was the loving husband of Viola M. Clark--they celebrated 68 years of marriage. Born October, 27, 1931, in Bethlehem, he was the son of the late Harold and Helen Clark. He attended Liberty High School. Bob served honorably in the U.S. Army from 1950-1952. He began his employment at Bethlehem Steel in 1952, retiring October 1986. He spent winters vacationing in Myrtle Beach, SC. He was an avid golfer, playing as much as he could. Bob was the Club Champion at Bethlehem Municipal Golf Course in 1991. He had many happy memories playing golf with all of his buddies. He also enjoyed watching his grandkids’ baseball games and occasionally yelling at umpires. He will be sadly missed by his wife Viola; three sons: Robert H. Clark, Jr. (Kerry); Bruce W. Clark (Debra); Keith A. Clark (Jessica); four grandchildren: Robert B. Clark (Regina), Sydney, Jarrett, and Aaron Clark; and one great-grandson: Owen Clark. Relatives and friends are invited to a viewing at Connell Funeral Home, Inc., 245 East Broad Street, Bethlehem, on Friday, July 16, 2021, from 10:00 to 11:00am. The funeral service will begin at 11:00am in the funeral home. Interment will be in Cedar Hill Memorial Park, Allentown. In lieu of flowers, memorial contributions may be made to PA Caring Hearts, 656 Yorkshire Drive, Breinigsville, PA 18031.

The family of Robert H. Clark, Sr. created this Life Tributes page to make it easy to share your memories.

Send flowers to the Clark, family.