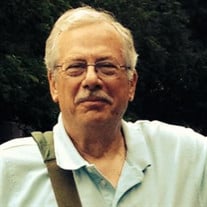 Russell W. D’Entrone, 71, of Bethlehem, died on May 5, 2021, Due to complications from his work responding at the World Trade Center on 9/11. He was born March 5, 1950 in Plattsburgh, NY; son of the late Vito and Nancy (Peterson) D’Entrone. Russell is survived by his devoted wife of nearly 49 years, Kathleen (Lehmann) D’Entrone. Russell was a graduate of SUNY-Oswego where he earned a bachelor’s degree in British Literature. Earlier, he worked as an Aquatic Director at Cohoes Community Center and later worked in youth services for the American Red Cross, Albany Chapter. Russell found his calling with the Federal Bureau of Investigation, where he served as a Special Agent for the FBI for 23 years. He was a first Office Agent in Kansas City Missouri, later transferred to the NYC Office and served for 18 years. For 18 of his years with the FBI, Russell worked undercover. After retirement, he served as a president of the Society of Former Special Agents of the FBI Lehigh Valley Chapter. Russell dedicated his time to various organizations; including ArtQuest, Bethlehem Area School District Authority and Bethlehem Area Vocational Technical School Authority. He will be remembered for his upbeat and thoughtful personality. Russell enjoyed playing the guitar, skiing, riding his Harley, attending silent auctions. He loved history and travelling. His travels took him all around the world including an African Safari, Amazon Cruise, Russia, Greece and other parts of Europe. He most especially loved spending time with his family. Russell will be dearly missed by his wife, Kathy; son, Christopher and wife, Laura of Albany, NY; daughter, Kerry and her husband, Dean Sacks, Jr. of Bethlehem; as well as his grandchildren, Henry, Riley, and Savannah. The family will receive guests on July 24, 2021 from 11 am to 12 pm with a ceremony to honor Russell’s life to immediately follow at Connell Funeral Home, 245 E. Broad St. Bethlehem, PA 18018. Burial will be private. Memorial contributions may be made to World Wildlife Fund, 1250 24th Street, N.W. Washington, DC 20037.

The family of Russell W. D'Entrone created this Life Tributes page to make it easy to share your memories.

Send flowers to the D'Entrone family.