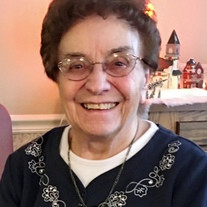 Shirley Mae Arawjo, 90, of Freemansburg, died on September 2, 2021 at Moravian Hall Square. She was born February 7, 1931 in Freemansburg; daughter of the late Robert and Sylvia (Werkheiser) Burgess. Shirley was preceded in death by her husband, Walter "Cogi" Arawjo in 2012. Shirley will be lovingly remembered as a selfless and giving woman who lived her life for her children and grandchildren. She loved nothing more than to be with her family. Shirley enjoyed her annual vacations to Wildwood, NJ where she loved to sunbathe and stroll along the boardwalk, and especially to Ontario, Canada, where she enjoyed fishing, swimming and boating with her family. Shirley was an avid sports fan. The Philadelphia 76ers, Phillies, and Eagles held a special place in her heart but she especially rooted for the Penn State Football team. She also had a successful strategy when playing the lottery. Shirley graduated from Liberty High School where she excelled at typing. She served as a typist and bookkeeper for Synthetic Thread and later Just Born until her retirement. She was a devoted member of Christ Evangelical Lutheran Church, Freemansburg. Shirley will be dearly missed by her sons, Darryl Arawjo and wife, Karen; Kevin Arawjo and wife, Catherine; daughter, Ginger Mihulec and husband, John; grandchildren, Justin, Sean, Ian, Shannon, and Stacy; and great grandchildren, Michael, Tucker, Autumn, and Journey. She was also predeceased by her sister, Loretta Schlicher. A visitation will be held on Saturday, September 4, 2021 from 10-11 a.m. at Connell Funeral Home, 245 E. Broad St. Bethlehem, PA 18018, immediately followed by a ceremony to celebrate Shirley's life. Burial will be held at Union Cemetery, Hellertown. In lieu of flowers, contributions may be made to the Christ Evangelical Lutheran Church, 302 Main St. Freemansburg, PA 18017. Condolences may be offered at www.connellfuneral.com.

Shirley Mae Arawjo, 90, of Freemansburg, died on September 2, 2021 at Moravian Hall Square. She was born February 7, 1931 in Freemansburg; daughter of the late Robert and Sylvia (Werkheiser) Burgess. Shirley was preceded in death by her husband,... View Obituary & Service Information

The family of Shirley Mae Arawjo created this Life Tributes page to make it easy to share your memories.

Send flowers to the Arawjo family.