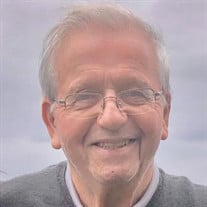 William A. Elek, III, 79, of Lower Saucon, died at his residence with his family by his side. He was born in Bethlehem on August 18, 1941; son of the late William A. Elek, Jr. and Ann (Longo) Elek. William is survived by his devoted wife of 53 years, Jeanne (Danek) Elek. William will be lovingly remembered for his kindness, selflessness, and loyalty. He was a humble man with a great sense of humor; his personality made him easy to love by all. He was a graduate of Allentown Central Catholic High School where he was a standout athlete and earned his bachelor’s degree from Mount St. Mary’s where he was the class president and captain of the soccer team. William honorably enlisted in the U.S. Marine Corps Reserves. William dedicated 37 years of his career to the Bethlehem Steel Corp. in management and consulting. He also worked for the family business, Elek Plumbing, until his retirement. William was active in several local organizations which stemmed from his lifelong family connection to Bethlehem. He was extremely faithful, as demonstrated by his activity at Assumption of the Blessed Virgin Mary Roman Catholic Church, Bethlehem, where he served on numerous committees. Throughout his spiritual life, he was dedicated to 2 men’s prayer groups as well as preparing meals and supporting the Victory House community. William was an avid golfer and volunteered at the Lehigh University Golf Learning Center, in addition to coaching his children’s sporting events throughout their lives. He will be dearly missed by his wife, Jeanne; daughters, Kirsten Singley and fiancé, Jeffrey Cary; Brittany Azzolina and husband, Joseph; Regan Palazzo and husband, Michael; and son, William A. Elek, IV and wife Fabiana; as well as his brother, Stephen and wife, Kathleen. William was preceded in death by his sister, Anita Zambelli. William, known and loved as “Pop Pop”, found great joy in his 10 grandchildren; Madelyn, Grace, Emma, Elise, Sarah, Dante, Marco, Liliana, Crew and Kai. Through his warmth and humor, he was their greatest fan and will be carried in their hearts forever. Arrangements have been entrusted to Connell Funeral Home. Family will receive guests on Saturday, March 6, 2021 from 9:30-10:45 a.m. at Assumption BVM, 4101 Old Bethlehem Pike, Bethlehem, PA 18015. After brief words of remembrance, Mass of Christian Burial will follow at 11:00 with a private family interment at a later date. Masks and social distancing required with a limited number of guests in church at one time. Memorial contributions may be made to Alzheimer’s Research Foundation, https://www.alzheimersresearchfoundation.com/ and/or Victory House of Lehigh Valley. https://www.victoryhouselv.org/donate/ LIVE STREAMING INFORMATION: Connell Funeral Home is inviting you to a scheduled Zoom event starting at 10:40am. Words of Remembrance and Mass of Christian Burial for William Elek, III Join Zoom Meeting https://us02web.zoom.us/j/88169421445?pwd=alZrV2FnVGdzVVlVTDYrYWI0aDFSdz09 Meeting ID: 881 6942 1445 Passcode: 230457

William A. Elek, III, 79, of Lower Saucon, died at his residence with his family by his side. He was born in Bethlehem on August 18, 1941; son of the late William A. Elek, Jr. and Ann (Longo) Elek. William is survived by his devoted wife of... View Obituary & Service Information

The family of William A. Elek III created this Life Tributes page to make it easy to share your memories.

Send flowers to the Elek family.