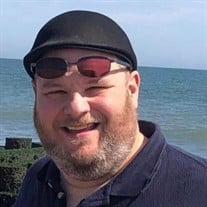 Anthony G. Martucci, 48, lifelong resident of Bethlehem, died on November, 1, 2021 after a tremendous battle with Covid-19. He will be lovingly remembered as a man with a warrior spirit who triumphed over kidney failure and a right foot amputation. A courageous fight that has been ongoing for the past 6 years. Anthony was a family man at his core. He loved his wife of 22 years, Tina Marie (Schatz) Martucci and sons, Nicholas and Trevor, with all of his being. Often his victories were in direct connection with his determination to be present for his family. Anthony was a jovial man that had a tremendous smile who was loved by all he encountered. When asked how he was doing, his typical response of “Just Ducky” was a testament to his kind-hearted spirit. In recent months, he shared his time with his beloved dog, Peri. They enjoyed their naps and playing “sockie” on a regular basis. Music played a major role in Anthony’s life. He met his wife while he was singing karaoke. Tina knew that very first night he was the one. Anthony was a member of the Bethlehem Catholic Marching Band, where he formed lifelong friendships. Because band was such an important part of his life, he passed his trumpet to his son, Trevor when he became a Grenadier. He found great peace in the songs he listened to; especially when his son, Nicholas performed with his barbershop quartet. He was an amazing vocalist himself and was cheered on often when he sang at the local karaoke bars. His beautiful tenor voice was what drew Tina to him many years ago. In his younger years, The American Heart Association was a special non-profit where Anthony volunteered his time. More recently his dad-jokes were heard at the NE Middle School bingos as he called the numbers. Here he formed amazing relationships with parents. He appreciated sports, fantasy football, and watching the History Channel. A fan of Star Trek and Dr. Who, he also found great joy in watching the Sci-Fi channel. One of his greatest passions was all things Disney. He has a passion for visiting the Disney Parks with his family and collecting Disney memorabilia. Disney was his magical place. All family memories are wrapped in visiting the “mouse.” Anthony was born December 23, 1972 in Bethlehem; son of Lucille C. (VanAuken) Labert Martucci and the late Nicholas M. Martucci. He was a 1990 graduate of Becahi and attended Desales University. Anthony worked as a computer analyst until his health no longer allowed him that opportunity. In addition to his mother, wife, and children, Anthony is survived by his siblings, Thomas V. Labert, Stephen J. Labert, Carmeline Martino, Antoinette Pollick, Nicholas M. Martucci, Jr., and Carl Martucci, as well as his dog, Peri, extended family and friends. He was preceded in death by his brother, James C. Martucci. A visitation will be held on Saturday, November 6, 2021 from 10:30 a.m.-1:30 p.m. with a celebration of life to immediately follow at Connell Funeral Home, 245 E. Broad St. Bethlehem, PA 18018. Guests are kindly asked to wear a mask upon entry. Burial will be held at Bethlehem Memorial Park. In lieu of flowers, memorial contributions may be made payable to “Tina Marie Martucci” and will be applied towards a college scholarship fund for Anthony’s children.

Anthony G. Martucci, 48, lifelong resident of Bethlehem, died on November, 1, 2021 after a tremendous battle with Covid-19. He will be lovingly remembered as a man with a warrior spirit who triumphed over kidney failure and a right foot amputation.... View Obituary & Service Information

The family of Anthony G. Martucci created this Life Tributes page to make it easy to share your memories.

Send flowers to the Martucci family.