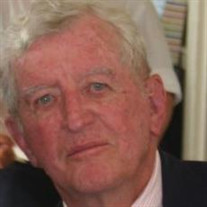 Brendan A. Morrow 93, of Bethlehem, PA (formerly Massapequa, NY) passed away peacefully in his home surrounded by family on May 21, 2022. Born on June 14th, 1928 he was the son of Arthur and May (Aman) Morrow. He was the beloved husband of Dorothy (McGarry) Morrow for the past 66 years. Brendan graduated from Sewanhaka High School and Hofstra University both located in New York. He also proudly served in the US Army. After 36 years, he retired in 1992 from Bethlehem Steel where he worked in Corporate Securities and Shareholder Relations. Brendan had many interests and hobbies. He was a big football fan and counted both the NY Giants and Lehigh as his favorite teams. Nascar and horse racing were right up there as well. He is named after Brendan the navigator which is very appropriate because he was a boater and loved all things related to the sea. This passion led him to teach a boating course for the US Power Squadron for many years. Skiing and golfing with his children were favorite activities and pursued both well into his 80s. He loved to work with his hands. He could fix and build anything. His creations included a boat and furniture. Every day would end with cultural hour sitting on his deck with a book or crossword puzzle and a cold beer. He was a devoted Catholic and taught CCD at St. Anne’s Church in Bethlehem for many years. His love for his family had no bounds. He was so proud of his children and grandchildren and could often be seen on the sidelines of many a sporting event with camera in hand. Trips to Chatham, MA and Spring Lake, NJ with his family were a highlight and he has the pictures to prove it. Brendan is the proud father of six daughters, the grandfather of 24 and the great grandfather of 5. He always said he could not have had better sons-in-laws if he had picked them out himself. They in turn have lovingly nicknamed him “the savvy veteran” or savvy for short. Brendan will be dearly missed by his wife Dorothy, daughters Ann Klages(Glenn), Joan Brosious(Kevin), Jean Clark(Terry), Patricia Dwyer(Kevin), Susan Finney(Reed) and Jane Mulvihill(Topher) 24 grandchildren and 5 great grandchildren. In addition to his parents, Brendan was preceded in death by his sister Jean Morrow, mother-in -law Florence McGarry, sisters-in-law Ann McGarry and Joan McGarry and brother-in-law John McGarry. There will be a viewing on June 2, 2022 from 6-8:00 p.m. at Connell Funeral Home, 245 E. Broad St., Bethlehem, PA 18018. Another viewing will be held on June 3, 2022 from 10-11:00 a.m. at St. Anne’s Catholic Church, 450 E. Washington Ave., Bethlehem, PA 18017 with a Mass of Christian Burial beginning at 11. Interment will follow in Holy Saviour Cemetery. In lieu of flowers, the family requests donations to Tunnel to Towers, a charity near to his heart.

Brendan A. Morrow 93, of Bethlehem, PA (formerly Massapequa, NY) passed away peacefully in his home surrounded by family on May 21, 2022. Born on June 14th, 1928 he was the son of Arthur and May (Aman) Morrow. He was the beloved husband of... View Obituary & Service Information

The family of Brendan A. Morrow created this Life Tributes page to make it easy to share your memories.

Send flowers to the Morrow family.