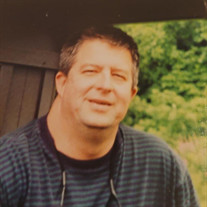 David Joseph Valek,64, of Bethlehem, passed away on Monday September 6, 2021, after battling courageously through his illness. He was married to Lisa Elizabeth (Kienle) Valek for just shy of 42 years. Born in Allentown on October 25, 1956, David was the son of the late Joseph S. Valek and Margaret (Lipka) Valek. David graduated from Liberty High School in 1975 and was a proud member of the Liberty High Grenadier Marching band. He attended Kutztown University and Lehigh Carbon Community College, where he learned the electrical and HVAC trades, which would define his career path. David and his wife owned and operated their business, Advanced HVAC Supply Company for ten years. At the time of his death, David was employed by Hannabery HVAC, where he began his career there in the installation department, then moved to the sales department and he then became an integral member of the management team, serving as Vice President of Hannabery for 30 years. David will fondly be remembered for his love of his family, travel, cruises, and Disney World. He enjoyed trains and had an extensive model train collection. David was also an avid Philadelphia Eagles fan, even dedicating an entire room in his home to the Eagles. Survivors: in addition to his wife, Lisa, he is survived by two daughters, Jennifer Hunger and husband Erik; and Rebecca Gardner and husband Scott; two grandsons, Jacob and Nathan Hunger; sister, Maryjean Haberl and husband Bill; brothers, Joseph W.S. Valek and James J. Valek; and many nieces and nephews. The family will receive guests on Thursday, September 16, 2021 from 10:00 AM to 12:00 PM at Connell Funeral Home, 245 E. Broad St, Bethlehem, PA 18018. Immediately following there will be a funeral service beginning at 12:00 PM in the funeral home. Memorial contributions may be made to Disabled American Veterans (DAV). Condolences may be offered at www.connellfuneral.com.

David Joseph Valek,64, of Bethlehem, passed away on Monday September 6, 2021, after battling courageously through his illness. He was married to Lisa Elizabeth (Kienle) Valek for just shy of 42 years. Born in Allentown on October 25, 1956, David... View Obituary & Service Information

The family of David Joseph Valek created this Life Tributes page to make it easy to share your memories.

David Joseph Valek,64, of Bethlehem, passed away on Monday September...

Send flowers to the Valek family.