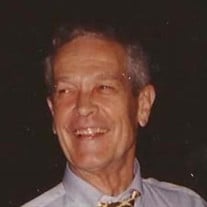 Donald Edwin Olson, 92, passed away peacefully in his home in Lower Saucon Township surrounded by loved ones on September 27, 2021. Don is the husband of Nancy (Walton) Olson. He was born to Harold Bergwall Olson and Edythe (Roberts) on August 29, 1929, in Elizabeth, NJ and spent his childhood in Rutherford, NJ. Upon graduation in 1951 from Rutgers University, Don received a bachelor’s degree in Mechanical Engineering and a commission as 2nd Lieutenant in the United States Air Force. He spent the 2nd year of his service stationed in Alaska monitoring Russian activity in the Aleutian Islands during the Korean War. Immediately following his military service, Don began working for Bethlehem Steel in 1953 as a Looper (Bethlehem Steel’s management program). His career spanned 42 years where he was initially assigned as a Turn Foreman followed by multiple promotions that led to his role as the Superintendent of the Saucon Rolling Mills. He finished his career as the Manager of the Steelton Rail Mills where he retired in 1995. Don met his true love and life partner, Nan, on a blind date during his senior year at college. The couple married in 1953, and recently celebrated their 68th anniversary. Together they raised 4 children, nurturing them in their passions, vacationing in Disney World and Mount Rushmore, and most memorable their annual two-week vacation for more than 40 years in South Bethany, DE with extended family and friends. He was a loving husband and father, and an amazing “Pop” to his grandchildren. Don loved to play games and compete with family and friends: golf, tennis, bowling, cards, and board games. If it was competitive, he gave it his all. Don and his wife were well recognized duplicate bridge players having both achieved their Silver Life Masters in bridge. Don was a member at First Presbyterian Church of Bethlehem, West Shore Free Church in Mechanicsburg, and Grace Church Bethlehem. He took an active leadership role in several organizations. He served as a Board Member of the Lehigh Valley Bridge Association, Boy Scout Scoutmaster at Donegan Elementary School, President of the Middletown, PA Rotary Club, Vice President at Country Club of Harrisburg, President of the Harrisburg Bridge Club Association, and Board of Governors and Vice President of his housing community Four Seasons at Saucon Valley. Left to cherish his memory are his wife Nancy (Walton) Olson, brother Rusty Olson (Jeanette), and sister Barbie DeRonde (Stew). Children; Eric Olson, Cindy McQuay (Mark), Karen Buck (Chip), and David Olson (Michelle). Grandchildren; Cameron McQuay (Layla), Sydney McQuay, Sam Buck (Faith), Eric McQuay, Jacqueline Olson, Christopher Buck, and William Buck. Great grandchildren; Julian and Pierce. Predeceasing Don was his grandson Isaac Walton Olson in 2005. Don will be laid to rest in Fort Indiantown Gap, PA. In lieu of flowers, a donation can be made in Don’s memory to Young Life of the Lehigh Valley, 85 E. Broad Street, Bethlehem, PA 18015. A Celebration of Life will be held at First United Church of Christ at 501 Northampton Street, Hellertown, PA on Thursday, October 28th at 11:00 AM.

Donald Edwin Olson, 92, passed away peacefully in his home in Lower Saucon Township surrounded by loved ones on September 27, 2021. Don is the husband of Nancy (Walton) Olson. He was born to Harold Bergwall Olson and Edythe (Roberts) on August... View Obituary & Service Information

The family of Donald E. Olson created this Life Tributes page to make it easy to share your memories.

Donald Edwin Olson, 92, passed away peacefully in his home in...

Send flowers to the Olson family.