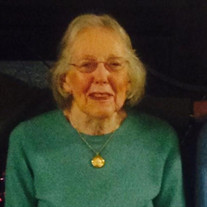 Gloria Ruth Matson, 96, of Bethlehem, died on April 20, 2021. She was born in the village of Fullerton, daughter of the late U.S Representative Albert Vaughn and Ruth McCloskey Vaughn, and graduated with honors from Whitehall High School. Following her high school graduation, she was employed by E.C.Machin Construction Co. where she worked until the birth of her first daughter. Gloria was preceded in death by her husband of 49 years, Norman F. Matson. She will be lovingly remembered as a true lady; she was classy, stylish, and outgoing. In her free time, Gloria enjoyed traveling. From 1953 until 1966, Gloria’s efforts were focused on her husband and two daughters. But when she determined her daughters no longer required her attention full time, she set out to find employment again in a position where she could develop skills that would enhance her life experiences and bring her joyful satisfaction. She found that employment at S.I. Handling Systems. Her skills and work ethic quickly earned her great respect from the marketing vice-president and she soon became the in-house contact for S.I. customers and later the ombudsman for all customer complaints. By 1977, Gloria’s job performance had earned her a very significant promotion to the management position of Personnel Manager where she oversaw about 178 salaried and 100 union employees. Jack Magee, S.I.’s employee relations manager, said “She does a tremendous job and just about everything unassisted.” At the time, promotion of women to management positions in the corporate world was very infrequent. In 1982, Gloria received a further promotion to the position of employee relations manager from which she retired in 1985. Gloria was a member of the Easton-Phillipsburg Industrial Relations Group, the American Society of Personnel Administrators and the strategy committee of the Lehigh Valley Business Conference on Health Care. Gloria will be dearly missed by her daughters, Melissa Lemoi; and Gayle Kozak and her husband, Gary; grandson, Marc Lemoi and his wife, Sara; great grandson, Nathan Lemoi; brother, Rogers Vaughn; and sisters, Virginia Vaughn and Patricia Fainor. She was predeceased by her brother, Albert. Services have been entrusted to Connell Funeral Home and will be private. Contributions in memory of Gloria can be made to her favorite charity where she served as a board member, Community Services for Children, 1520 Hanover Avenue, Allentown PA 18109.

Gloria Ruth Matson, 96, of Bethlehem, died on April 20, 2021. She was born in the village of Fullerton, daughter of the late U.S Representative Albert Vaughn and Ruth McCloskey Vaughn, and graduated with honors from Whitehall High School. Following... View Obituary & Service Information

The family of Gloria R. Matson created this Life Tributes page to make it easy to share your memories.

Send flowers to the Matson family.