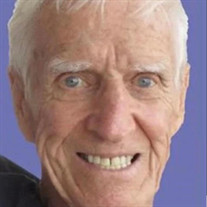 Harold A. Barwick, Jr., 87, of Bethlehem, passed away on Monday, December 21, 2020. Born August 5, 1933, in Bethlehem, he was the son of the late Harold and Dorothy (Kester) Barwick. Harold was the beloved husband of the late Justine “Judy” Barwick. They were married for 64 years. Harold was a graduate of Liberty High School where he played on the basketball team and earned a bachelor’s degree from Moravian College after serving in the U.S. Army. Harold served in the Army as a radio operator during the Korean War and was also a member of the National Guard. He worked at the Bethlehem Steel for 40 years and retired in 1992 as an electrical foreman. Harold later became part owner of Fox Hollow Golf Club in Trumbauersville and was co-owner of Timber Ridge Golf Club in Talladega, AL. Harold was an avid golfer and played in many leagues and tournaments around the area. After retiring from the golf club in Talladega, he became the owner of B & K Electrical & Mechanical Services. Harold was a parishioner of Notre Dame of Bethlehem Church. Harold was affectionately known to his family and friends as Jr or Slim. In his earlier years he was active in intramural basketball and baseball leagues as well as a wrestling coach for the West Bethlehem Youth Association. Harold was a member of several social clubs including St. Bernard’s, where he also served as a bartender, Heights AA, the Jeff’s, the 540, and the Washington Republican. He was also an officer of the F-3 Fishing Club. Harold enjoyed golfing, fishing, and playing cards with his poker buddies. Most importantly he was a loving husband, father, pop-pop and brother. He will be lovingly remembered by his daughter, Karen Barwick and husband, James Sikora; son, Gregory Barwick; grandson, Justin Sikora; brother, Butch (Sue) Barwick; sisters, Charlotte (Geza) Laslo, Adella (Forrest) Asci, Alice Wallace; and his very much-loved feline friends, Mandy and Scooby. He was predeceased by his wife, Justine “Judy” Barwick, and brother, Danny Barwick. Services will be announced and held at a later date. In lieu of flowers, memorial contributions may be made to the Peaceable Kingdom, 1049 MacArthur Rd, Whitehall, PA 18052.

The family of Harold A. Barwick, Jr. created this Life Tributes page to make it easy to share your memories.