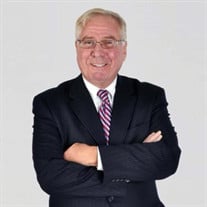 J. Michael Schweder, age 71, passed peacefully on January 15, 2021, at home surrounded by his wife, Annette, and their three sons. Mike, born in 1949, was a resident of Bethlehem, PA until 2017, when he and Annette moved to Yardley, PA to be closer to their children and grandchildren. Mike is the son of the late John “Bull” and Mary (Lyons) Schweder, and a 1967 graduate of Bethlehem (Liberty) High School. Mike and Annette married in 1972 at Saints Simon and Jude Catholic Church in Bethlehem. After graduating from high school, Mike attended Lycoming College in Williamsport, PA where he met Annette (Weaver). Mike played four years of varsity football for the Lycoming Warriors, twice named defensive player of the year. In 1997, Lycoming inducted Mike into the Warrior Hall of Fame. Mike remained a committed alumnus following his graduation in 1971, supporting the football program and the Warrior Club for decades. In 2016, Mike became a Member of Lycoming College’s Board of Trustees. Throughout his life, Mike believed in public service. From 1974 to 1980, Mike represented the residents of the 135th Legislative District in the Pennsylvania General Assembly. In 1980, Mike ran unsuccessfully for the United States Congress. In 1998, Mike returned to public service when Bethlehem’s residents elected him to represent the City he loved as a Member of Bethlehem City Council. Mike served from 1998 to 2010, and served three terms as Council President. Mike also had a long career in the private sector, working for Air Products and then for AT&T for 35 years. Mike began his tenure with AT&T as Director of Public Affairs in Harrisburg, PA in 1983, and transitioned to Regional Director of Government Affairs in the company’s Washington, D.C. office in 1985. He moved to Corporate Headquarters in New Jersey in 1996, named State President of New Jersey in 2000, and assumed responsibility for Pennsylvania four years later. In 2008, AT&T promoted Mike to President of Mid-Atlantic States, with additional responsibilities for Maryland, Delaware, Virginia, West Virginia, and Washington, D.C. He retired in November 2018. For 18 years, Mike also served as a Member of NJM Insurance Group’s Board of Directors. Above all, Mike loved his family. He gave them love, discipline, support, and guidance. He also was a friend, father figure, and mentor to countless others. In addition to Annette, Mike is survived by his three sons, Rob, his wife Lindsay Birckhead, and grandsons Emmett and Cole; Jack, his wife Erin (Scharkozy), and granddaughters Harper, Olivia, and Addie; and Michael, wife Victoria (Kassab), and grandchildren Piper, Johnny, and Charlie; as well as three sisters, Anne Berg, Libby Geyer, and Stephanie Schweder-Kratzer. Arrangements have been entrusted to Connell Funeral Home. For the immediate family only, a private Mass of Christian Burial will take place on Thursday, January 21, 2021. Local close friends and relatives are invited to attend a short, outdoor burial service at 12 noon on Thursday, January 21, 2021 at Nisky Hill Cemetery at 254 E. Church St, Bethlehem, PA. Please follow all Covid-19 CDC guidelines, specifically masks and distancing. In lieu of flowers, the family requests donations to the J. Michael and Annette Schweder Endowed Scholarship in the Sciences at Lycoming College, link and address below. Lycoming College, Office of College Advancement, 1 College Place, Williamsport, PA 17701 https://www.lycoming.edu/advancement/give-now.aspx (select “other” from the drop down box and include “Schweder Scholarship” in the text box) Connell Funeral Home is inviting you to a scheduled Zoom meeting. Mass of Christian Burial for J. Michael Schweder Jan 21, 2021 10:45 AM Eastern Time (US and Canada) Join Zoom Meeting https://us02web.zoom.us/j/89367976239?pwd=YzlGT1NjeDlWQXkveWJsSjMzODlIZz09 Meeting ID: 893 6797 6239 Passcode: 360963

J. Michael Schweder, age 71, passed peacefully on January 15, 2021, at home surrounded by his wife, Annette, and their three sons. Mike, born in 1949, was a resident of Bethlehem, PA until 2017, when he and Annette moved to Yardley, PA to be... View Obituary & Service Information

The family of J. Michael Schweder created this Life Tributes page to make it easy to share your memories.