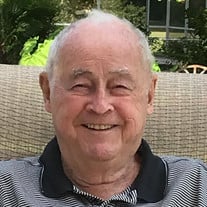 John E. “Jack” Cauley passed away at his Ocala, Florida home on December 16, 2021. He was born to the late Mary Dougherty and William Cauley in Hazelton, Pennsylvania on July 23, 1930. Following his graduation from St. Gabriel’s High School in Hazelton in 1949, Jack joined the Army and took basic combat training at Fort Dix, New Jersey. He then attended a four-week course on Infantry Leadership. Upon completion of the course, he was sent to Fort Benning, Georgia and was assigned to the 3rd Division, 30th Infantry Regiment. There, he received intense Infantry training until the Korean War began. In August 1950, his unit set sail for Korea and landed in Pusan. His unit became the 3rd Battalion of the 7th Cavalry which was awarded a Presidential Unit Citation for their bravery and perseverance during the Pusan Perimeter operation. Jack was wounded three times while serving in the Army. For his actions in Korea, he was honored with the Silver Star Medal, the Purple Heart with Cluster, the Korean Service Medal with 5 Bronze Service Stars, the United Nations Service Medal and the Combat Infantry Badge. When Jack received his discharge, he held the rank of Master Sergeant First Class. Following his service to our country, Jack joined Pennsylvania Power & Light Co. in 1955 as a lineman in the Lehigh Division. In 1976, Jack was named the Community Affairs Consultant in the Consumer and Community Affairs Department within PP&L. Jack was an active member of his community and avid contributor to the organizations he valued. He was a past Grand Knight of the Knights of Columbus and a member of St Bernard’s Society in Bethlehem. He served as vice president of the Holy Name Society of Notre Dame Church in Bethlehem and was a member of the Hazleton American Legion Post. More recently, he joined the Pennsylvania American Legion and the Atomic Survivors, and served as the President of the Korean War Veterans Chapter 7th Cavalry Regiment Association. Jack earned his Bachelor of Science in Business Administration from DeSales University. Jack married Marjorie Schellenberg, on February 14, 1953. He and his wife had five children whom they raised in Bethlehem, Pennsylvania and Hatfield, Pennsylvania before retiring to Ocala, Florida. Jack and Marge were happily married until her passing in 2013. Jack is survived by his daughter, Karen Cauley and husband, Michael Loscalzo, his daughter, Janet Cauley, his son, Tom Cauley and wife, Mindy; his eight grandchildren: Steven Loscalzo and wife, Kelly, Jill Wallace, Mathew Loscalzo, Danielle Manning and husband, Jack Tyson, Kevin Cauley, Lauren Cauley, Jaqueline Ross, Christine Schlarbaum, Michael Schlarbaum, and Kristin Gossel and husband, John; and his five great grandchildren: Kendal Gossel, John Gossel, Benjamin Loscalzo, Sophie Loscalzo, Hannah Loscalzo, and another great grandchild expected in May. Jack will be sorely missed by the many family members and friends lucky enough to have been blessed by his humor and touched by his warmth. Jack is preceded in death by his parents; his wife, Marjorie; his children, Kevin and Elizabeth; and his siblings, William, James, Anne, Rosemary, and Teresa. He also is preceded in death by his wife following Marge’s death, Beverly Baird. The family will receive guests at Notre Dame of Bethlehem, 1861 Catasauqua Rd., Bethlehem, PA 18018 on Saturday, January 29, 2022 from 10-11 a.m. immediately followed by a Mass of Christian Burial. Masks are strongly encouraged upon entry to the church. Inurnment will be held at Holy Saviour Cemetery. In lieu of flowers, the family asks that donations be made to Hospice of Marion County, Circle of Honor, 2895 SE 62nd Street, Ocala, Florida 34480.

The family of John E Cauley created this Life Tributes page to make it easy to share your memories.