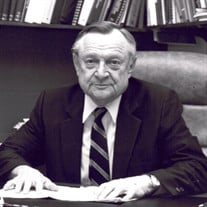 John Kolchin, Ed.D, of the Masonic Village Elizabethtown passed away peacefully Sunday, October 18, 2020 in the Masonic Health Care Center where he had been a patient since August, 2019. His wife was at his side when he passed. He was 89 years old. Born in Shenandoah, PA, March 22, 1931, John was the son of the late Peter and Eva Voytovitch Kolchin. John was a graduate of Hellertown, PA high school class of 1949. He served in the United States Navy for four [4] years following his high school graduation. He was an air traffic controlman at Lakehurst Naval Air Base in NJ, and was the recipient of a commendation for alertness on duty. The GI Bill and a scholarship from Moravian College in Bethlehem, PA enabled John to earn a Bachelor’s degree and graduate in 1957. He earned a Masters’ Degree in education from Glassboro College in NJ in 1964 and a Doctor of Education in 1983 from Rutgers University, NJ. John was a teacher, vice principal, and principal. He was Superintendent of Schools for the Green Brook, NJ school district for 27 years and retired in 1992. He began a full day kindergarten program in the 1980s which became a model for other NJ school districts. John also served as an adjunct professor for several colleges in NJ where he taught education courses on the graduate level. Education, on every level, was his life. In September 1965, John was raised to Free & Accepted Masonry to Cannon Lodge #104, South Seaville, NJ, and has remained a member until now. In 2003, he became a member of Lehigh Lodge #326, Macungie, PA, where he is also a member until now. In 2013, John and his wife became members of Dallas, PA Chapter #396, Order of Eastern Star, and remain members today. In 2002, John raised his son John A. Kolchin in LaFayette Lodge #27, Rahway, NJ, and in 2007, John A. Kolchin became Worshipful Master of LaFayette Lodge. Conor W. Kolchin was raised in Atlas Pythagoras Lodge, Westfield, NJ in June 2019 by his father, John A. Kolchin. Dr. John Kolchin is also a member of American Legion Post #0397, Hellertown, PA. John loved to read – especially non-fiction books about World War II. He was an avid sports fan of college and professional football and baseball. He loved the Philadelphia Eagles and the Philadelphia Phillies. NCAA March Madness was one of his favorite times of the year. The Kolchins lived at the Masonic Village Dallas, PA, from 2007 to 2018. While in Dallas, they belonged to Temple B’nai B’rith, Kingston, PA. They also served as packers and board members for the West Side Food Pantry at the Church of Christ Uniting in Kingston, PA. The Kolchins traveled throughout the United States and Canada after they retired. They also enjoyed many Holland America cruises including one special maiden voyage out of New York City on the Noordam in 2006. John was preceded in death, in addition to his parents, by his stepson Glen David Fisher and his loving sisters: Anna Kolchin Mellin and Violet Kolchin Bartakovits. John is survived by his loving wife Barbara, son John A. Kolchin, NJ, daughter Karen Miller, FL and five grandchildren: Ian D. Kolchin, Macaire E. Kolchin, Conor W. Kolchin, and Craig Miller and Samantha Miller. He is also survived by a sister, Antonette Lebeduik of Easton, PA, and many nieces and nephews. Ian Kolchin is the oldest grandchild, and John was so proud of the well established professional adult he is. Macaire Kolchin graduated from Moravian College 57 years after her grandfather, 2014, and she is considered John’s “legacy”. Conor Kolchin is currently serving in the United States Coast Guard in NJ. Dr. Kolchin was so proud of all his grandchildren and their college educations. The Kolchin family wishes to extend its very heartfelt thanks and gratitude to the entire staff of Washington 3 at the Masonic Health Care Center and all the Masonic Village Home Care employees who aided in his well-being also. Due to the covid 19 pandemic, there will be no viewing or public funeral. Burial at Fort Indiantown Gap National Cemetery, Annville, PA, is limited to the very immediate family only. The Connell Funeral Home, Bethlehem, PA, is in charge of arrangements. In lieu of flowers, memorial contributions, if desired, may be made in Dr. John Kolchin’s name to the Masonic Village Children’s Home, Elizabethtown, PA, 17022, or Moravian College, Bethlehem, PA, 18018.

John Kolchin, Ed.D, of the Masonic Village Elizabethtown passed away peacefully Sunday, October 18, 2020 in the Masonic Health Care Center where he had been a patient since August, 2019. His wife was at his side when he passed. He was 89 years... View Obituary & Service Information

The family of John Kolchin, Ed.D created this Life Tributes page to make it easy to share your memories.