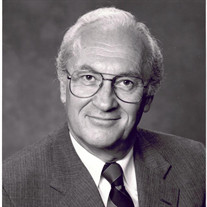 Joseph P Kender, 90, died on Thursday, January 7, 2021. Born in Hazleton, he was the son of Mary (Cortese) and Anthony Kender and the loving husband of Margaret (Gordon) Kender to whom he was married for 62 years. He was a graduate of Mt. St. Mary’s College in Emmitsburg Maryland, after which he served his country during the Korean conflict as a member of the United States Army Counter Intelligence Corps. He began his long-time career in education by teaching in the Paoli Area High School System while earning a Masters Degree from Villanova University. A Doctorate in Education at the University of Pennsylvania followed. Thereafter, Joseph joined the Educational Testing Service in Princeton New Jersey for two years. The lure of teaching remained strong and resulted in his next and last move back to his native Pennsylvania and a professorship at Lehigh University until 1997. Retirement gave Joe the opportunity to attend the Baum School of Art and develop his talent for painting, which he pursued successfully for many years with great satisfaction. Along the way Joe attended and faithfully served the newly-formed church of St. Joseph the Worker, found time to found The Gateway School for children with learning disabilities and support the interests of his and Marge’s three sons and, later, six grandchildren. He will be lovingly remembered by his wife of 62 years, Margaret Kender; sons, Mark A. Kender (Patricia), Christopher J. Kender (Amanda) and Joseph P. Kender, Jr. (Cindy); sister, Marilyn Kender Maldonado and grandchildren, Abigail, Julia, Gordon, Christopher, Kevin and Patrick. Joe was preceded in death by his brother, Francis Kender. A calling hour will be held on Wednesday, January 13, 2021 from 10-11 a.m. at St. Joseph the Worker Church 1879 Applewood Dr. Orefield, PA 18069. A Mass of Christian Burial will follow at 11 a.m. Burial will be held at Resurrection Cemetery. In lieu of flowers, memorial contributions may be made to St. Joseph the Worker Church.

Joseph P Kender, 90, died on Thursday, January 7, 2021. Born in Hazleton, he was the son of Mary (Cortese) and Anthony Kender and the loving husband of Margaret (Gordon) Kender to whom he was married for 62 years. He was a graduate of Mt. St.... View Obituary & Service Information

The family of Joseph P. Kender created this Life Tributes page to make it easy to share your memories.

Send flowers to the Kender family.