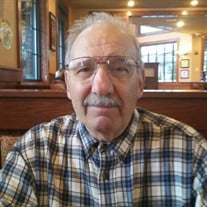 Joseph John Mitch, age 86, was called home the evening of May 13, 2022, for his eternal tea and krimpets. He spent his final days as he loved to spend all others, with his family. Joe was born to Anthony Mitch and Julia Szabo. As a child, his family moved around frequently, but his favorite place was a farm they lived on in Dresher. He served our country as a Marine, before coming home to marry his love of 66 years, Barbara. He often exaggerated how he “picked her up” after she “fell for him” roller skating. Together they built a life in Bethlehem with their son, Mark. He worked with the New Jersey Zinc company for 27 years before it’s closing. He then worked as a driver for Canteen until his first retirement. Shortly after, he quit retirement to drive shuttle and play Golden Oldies tapes for his passengers at Lehigh Valley Hospital. At 75, he finally became CEO of retirement. He worked hard in all his jobs, but his favorite by far was being Pap to his grandchildren. There were many mornings of a honking horn and shouts of "everyone out of bed". These were usually followed by afternoons of "excuse me, do you have any grey poupon" and a ride home. Every day with him was special, but he also loved to surprise everyone by showing up with things like trampolines and pools. Pap had a love of the outdoors and animals which he shared with his family. There were many trips to the “hoochy” cabin to feed the "chippies", with nights spent telling (usually the same) jokes by the fire. However, the best camping joke is one we still laugh about-- the time he got a speeding ticket on the way home. It was also one of the best kept secrets of his and his grandchildren for many years. Don't worry mom and dad, it was fine... In addition to his appreciation for the outdoors and its many animals, he was known to always carry biscuits should he meet a dog. Every dog was his friend. However, his best buddies were his granddogs who loved investigating his pockets for their goodies. Pap was a man with simple needs who made the most of every day—like Saturday morning breakfasts with family and friends, where he always had some pancakes with his syrup. He will be greatly missed by all who were lucky enough to love him. He is preceded in death by his parents Anthony and Julia; brother Anthony; sisters Antoinette and Julia. He is survived by his wife, Barbara Mitch; his son Mark and daughter in law Jody Mitch; his grandchildren Danielle, Karissa and Jason Mitch; sisters Geraldine Deily and Jean Gresh; along with many other nieces and nephews, as well as his four great granddogs. A visitation will be held at the Connell Funeral Home, Inc. 245 East Broad Street, Bethlehem, PA, on Wednesday, May 18, 2022, from 10:00 until the time of the funeral service, at the funeral home, at 11:00am. Interment will be in Cedar Hill Memorial Park. In lieu of flowers, Barbara has requested donations to the family's long-time church and neighbor- Church of the Manger UCC at 1401 Greenview Dr., Bethlehem, PA.

Joseph John Mitch, age 86, was called home the evening of May 13, 2022, for his eternal tea and krimpets. He spent his final days as he loved to spend all others, with his family. Joe was born to Anthony Mitch and Julia Szabo. As a child, his... View Obituary & Service Information

The family of Joseph J. Mitch created this Life Tributes page to make it easy to share your memories.

Joseph John Mitch, age 86, was called home the evening of May...

Send flowers to the Mitch family.