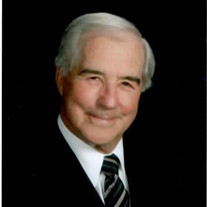 Dr. Joseph M. Skutches, 90, died peacefully on December 31, 2020 at St. Luke’s Hospital in Fountain Hill. A 1948 graduate of Slatington High School, he earned his Bachelor of Science degree from Muhlenberg College (1953) and his Doctor of Medicine degree from Jefferson Medical College (1957). After completing his internship and residency in Obstetrics and Gynecology at Misericordia Hospital in Philadelphia in 1962, he served two years as a Captain in the United States Medical Corps at Fort Dix, New Jersey. A consummate professional, much-esteemed colleague, and venerated teacher, he established a private medical practice, Bethlehem Obstetrics, in 1964 and served as private attending and resident teaching physician at St. Luke’s Hospital from 1964 until his retirement in 2015. He was also Assistant Chief (1979-1983), Chief (1984-1990), and Program Director, Resident Education (1984-1990) of the Department of Obstetrics and Gynecology at St. Luke’s. He served as President of the Northampton County Medical Society in 1975 and was appointed Associate Professor at the Temple University School of Medicine in 1983. Son of the late Joseph and Mary (Petrusky) Skutches, he is survived by his wife MaryAnn, sister Joan Hefflefinger (Karl); daughters Catherine Campanaro, and Meredith Skutches; sons Joseph (Joann), Gregory (Anne), Mike (Lynn), and David (Crystal); and ten grandchildren. Joe enjoyed golf and playing cards, dining out and going to the movies with MaryAnn, travel, reading, watching college and professional sports, and spending time with family and friends. A private service will be held for the family. In lieu of flowers the family requests donations be made to the St. Luke’s Hospital, Anderson Mother and Baby Unit; Grace Church Bethlehem Building Fund; or a charity of your choice.

The family of Dr. Joseph M. Skutches created this Life Tributes page to make it easy to share your memories.

Send flowers to the Skutches family.