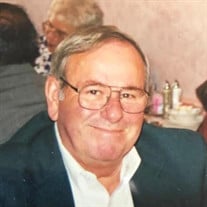 Leonard W. Barkis, 83, of Bethlehem passed away on Tuesday, January 26, 2021 at Lehigh Valley Hospital. Born in Bethlehem on November 14, 1937, he was the son of the late William and Mary (Toth) Barkis He was the husband of Josephine (Joanne, Jo) Sersen Barkis. They were married in October 1958 and celebrated their 62nd wedding anniversary last October. Lenny graduated from Liberty High School in 1955 and enlisted in the U.S. Air Force in October 1955. He started his Air Force Career at Sampson AFB, Geneva, NY and had assignments at the following Air Force Bases: Lowry, Denver CO; Yokota, Japan; Pease, Portsmouth, NH; Sheppard, Wichita Falls, TX; Vandenberg, Lompoc, CA; Holloman, Alamogordo, NM and Tyndall, Panama City, FL. Upon his return from Yokota, Japan in 1958 he married his high school sweetheart and introduced her to 17 years of military life. While at Vandenberg he attended night classes and received an Associates Degree from Alan Hancock Junior College, Santa Maria, CA. In 1974 while at Tyndall he was selected as the Outstanding Missile Safety NCO of the year in the Air Defense Command. He retired in November 1975 with 20 years of service and returned with his wife and children to Bethlehem. He spent 24 years at Buckeye and was the Contract Purchasing Manager when he retired in February, 2000. Lenny was an avid hunter, fisherman and golfer. He enjoyed attending Lehigh University Athletic events, especially football and basketball. He will be remembered by his loving wife, Jo, daughters, Valerie Benner, Lisa Ortiz and son in law Luis; brother, Leslie and his wife Monica of League City, TX; 3 grandchildren, Matthew Oravec and wife, Jessica, Cassie Redcay and husband, Matt and Paul Ortiz and wife, Liberty; 4 great grandchildren plus twin boys due in the spring. Lenny was preceded in death by his sister, Martha Lee Tuskes. He had an estranged son, Steven. Lenny served as the financial secretary and treasurer of the Lehigh South Side Booster Association for 20 plus years. He was a member of the Air Force Sergeants Association and Hellertown American Legion Post 397. He was a life member of the North End Wanderers Athletic Association and Jefferson Democratic Club. He was also a social member of the Bethlehem Volunteer Fireman’s Association, North End Republican Club, Portuguese American Club and St. Bernard’s Home Association. He was former member of the suppressed parish of St. Joseph’s Slovenian Catholic Church. A viewing will be held on Thursday, February 4, 2021 from 9 - 11 a.m. at Connell Funeral Home, 245 E. Broad St. Bethlehem, PA 18018. A funeral service will follow at 11 a.m. in the funeral home. Occupancy will be limited and masks must be worn in the funeral home. Burial with military honors will be held at Bethlehem Memorial Park. In lieu of flowers, memorial contributions may be made to Wounded Warriors Project 4899 Belfort Rd. Suite 300 Jacksonville, FL 32256.

Leonard W. Barkis, 83, of Bethlehem passed away on Tuesday, January 26, 2021 at Lehigh Valley Hospital. Born in Bethlehem on November 14, 1937, he was the son of the late William and Mary (Toth) Barkis He was the husband of Josephine (Joanne,... View Obituary & Service Information

The family of Leonard W. Barkis created this Life Tributes page to make it easy to share your memories.

Leonard W. Barkis, 83, of Bethlehem passed away on Tuesday, January...

Send flowers to the Barkis family.