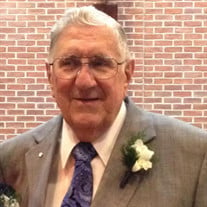 Leonard T. Verrastro, 90, of Bethlehem, passed away peacefully September 7, 2020 at home. He was born and raised in Dunmore, PA. He was the son of the late Salvatore and Sarah (Bonavoglia) Verrastro. Upon graduating from Dunmore High School in 1950, he enlisted in the US Air Force where he was stationed in Japan and Salina, Kansas and continued his service in the reserves until 1960. Leonard graduated from the Johnson Technical School and worked for Pinebrook Iron Works in Dunmore until 1970. From 1970 until 1984 he was a General Foreman and Superintendent for the Bethlehem Fabricators. He also worked for Transamerica delaval in Delaware, was a security operator at the Lehigh Valley Airport and was a proud employee of SWB&R Marketing Company in Bethlehem before officially retiring. Lenny was a family man and an avid gardener. He was a trained carpenter and could build anything. He was a loyal fan of the Philadelphia Eagles and Phillies. Leonard was a long-time active member of the Knights of Columbus, Trinity Council 313 of Bethlehem, where he was a past Grand Knight. Leonard was a member and Eucharistic minister at Our Lady of Perpetual Help Church in Bethlehem. Leonard is survived by his bride of 67 years, Elizabeth (DiVizio) of Bethlehem, his five children; Sarah Leddy and her husband Daniel of Bethlehem, Elizabeth Critelli and her husband Joseph of Wilson Borough, Salvatore Verrastro and his wife Roxanne of Emmaus, Marian Copley and her husband Richard of Hudson, Ohio, and Lynn Layton and her husband Keith of Conifer, Colorado, 12 grandchildren and 5 great grandchildren, brothers Vincent, Salvatore and Anthony and a sister Angie. In addition to his parents, he was precedent by his sister Catherine Mesiti. The family is very thankful to Dr. Scharle, Dr. Kolecki and Dr. Dunn for their special medical care to Leonard during the past few years. A viewing will be held on Thursday, September 10, 2020 from 6:30-8:30 p.m. at Our Lady of Perpetual Help Catholic Church, 3219 Santee Rd. Bethlehem, PA 18020 and again at the church on Friday from 10:00-11:00 a.m. immediately followed by Mass of Christian Burial. Burial will be held at Holy Savior Cemetery in Bethlehem. Arrangements have been entrusted to Connell Funeral Home. Memorial contributions may be made to the church and/or Family Pillars Hospice. Condolences may be offered at www.connellfuneral.com.

Leonard T. Verrastro, 90, of Bethlehem, passed away peacefully September 7, 2020 at home. He was born and raised in Dunmore, PA. He was the son of the late Salvatore and Sarah (Bonavoglia) Verrastro. Upon graduating from Dunmore High School... View Obituary & Service Information

The family of Leonard T. Verrastro created this Life Tributes page to make it easy to share your memories.

Send flowers to the Verrastro family.