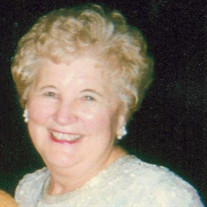 Margaret A. Ferri, 91, of Bethlehem, PA passed away on June 29, 2020 at St. Luke’s Hospital in Bethlehem. She was born on September 22, 1928 in Bethlehem, the daughter of the late Andrew J. and Anna (Podolan) Oravec. She is survived by her devoted husband of 67 years, John Ferri. Margaret was a graduate of Liberty High School, Class of 1946 and Bethlehem Business College where she received an Associate’s Degree in Accounting and Secretarial Studies. In 1975, she received Para Legal Certification from Southern Career Institute of Boca Raton, Florida. Margaret was a teletypist at the Bethlehem Steel Corporation for 3 years when she then entered the legal field and became legal secretary for Attorney Justin D.Jirolano for 10 years. After raising her children and caring for her elderly parents, she worked as a legal secretary/para legal for the law firm of Sigmon & Sigmon P.C., from October 1975 until her retirement on August 15, 2007. Margaret was a lifetime member of Ss. Cyril and Methodius Parish where she served as secretary of the Parish Activities Group for 25 years, the parish has since merged into Incarnation of Our Lord Parish. She was an active member of the Lehigh/Northampton Counties Legal Secretaries Association and the PA Legal Secretaries Association for many years and held various offices. She volunteered for the Miss PA Scholarship Organization for 15 years and was a Board Member for 8 years. She was a Board Member of the Slovak Catholic Federation and was president of its Cardinal Tomko Chapter for 20 years. She was a lifetime member of the Ladies PA Slovak Catholic Union, a fraternal benefit organization, and served as secretary of its local branch 130 for 51 years; and served as National Public Relations Director for 24 years; and as Treasurer of its Lehigh Valley District for 22 years. She was also a member of the First Catholic Slovak Ladies Association, Slovak Catholic Sokol, National Slovak Society and the Bethlehem Chapter of UNICO. Margaret was an active and dedicated volunteer for various charitable organizations and especially enjoyed sponsoring fundraisers for them. She and her husband always worked together as a team for their religious and fraternal organizations. On April 26, 2009 they both were honored at the 57th National Convention of the Slovak Catholic Federation in Bethlehem with the “Pro Ecclesia et Pontifice” Papal Medal in recognition of service to the church and the papacy. This is the highest religious medal presented to a lay person. Although Margaret was very active in various organizations, her greatest source of pride were her children, grandchildren and great grandchildren. In addition to her husband John, she is survived by 2 sons, John Andrew and his wife, Christie, of New Market, MD, David Anthony and his wife, Vanessa, of New York City, and a daughter, Patricia Ann and her husband, Dr. Rand Kienzle, of Malvern, PA, and grandchildren, Angelina Ferri of Frederick, MD, Nicole Ferri of New Market, MD, Victoriana, Jenna, Jace and Tate Kienzle of Malvern, PA and 3 great grandchildren, Carmella, Luca and Salvatore SanSeverino of New Market, MD, and several nieces and nephews. In addition to her parents, she was predeceased by a sister, Ann Haass, and 2 brothers, Joseph and Pfc. John J. Oravec, who was killed in Luzon in World War II. A viewing will be held from 6-8pm on Thursday July 2, 2020 at the Connell Funeral Home 245 E. Broad St. Bethlehem, PA 18018 and from 12-1pm on Friday at Incarnation of Our Lord Catholic Church 617 Pierce St. Bethlehem, PA 18015 followed by a Mass of Christian Burial at 1pm. Burial will be held at Holy Saviour Cemetery. Memorial contributions may be made to Incarnation of Our Lord Catholic Church or to the Carmelite Monastery 355 Lanark Rd. Coopersburg, PA 18034.

The family of Margaret A. Ferri created this Life Tributes page to make it easy to share your memories.

Send flowers to the Ferri family.