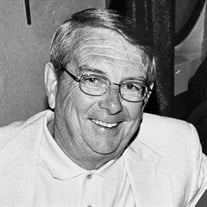 On Monday, March 21, 2022, Robert Francis Nonnemaker, loving husband and father of three, passed away at the age of 89. Robert, “Bob,” was born on December 8, 1932, in Bethlehem, Pennsylvania to Edward and Helen (Kroll) Nonnemaker. He worked for Bethlehem Steel for over 30 years, beginning his career in the factory and working his way up, retiring as a Systems Analyst. On July 16, 1955, Bob married Ann Marie Marcin. They raised two sons, Bob and Tom, and a daughter, Barbara. Bob was always very active. He had many hobbies. Bob loved golf, boating/fishing, tennis, basketball, swimming, all varieties of sports. He loved dancing, especially a polka. He also enjoyed playing the piano and singing. He was a true renaissance man. Bob was a member of The Knight’s of Columbus and of Notre Dame of Bethlehem Church where he served his Catholic community devoutly for many years. His jokes were incomparable; his sense of humor like no other, he was known for his quick wit. Bob was preceded in death by his parents. He is survived by his wife Ann Marie, his three children, Bob, Barbara, and Tom, his nine grandchildren, and his three great grandchildren. A visitation will be held at Notre Dame Catholic Church, 1861 Catasauqua Road, Bethlehem, PA 18018, on Friday, March 25, 2022, from 10:00am until the time of the Mass of Christian Burial at 11:00am, in church. Interment will be in Holy Saviour Cemetery, Bethlehem. Arrangements are under the care of Connell Funeral Home, Inc.

The family of Robert F. Nonnemaker created this Life Tributes page to make it easy to share your memories.

Send flowers to the Nonnemaker family.