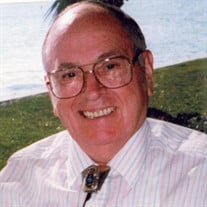 VICTOR C. GARBARINI, Ph.D, age 93+ years, passed away on Thursday, May 7, 2020. Victor was born on May 24, 1926 and was raised in The Bronx, NY. There he met and married in 1948 his beloved wife, Rita (Menniti). They raised 4 children: Victor Richard of NY, John Christopher (deceased), and a pair of twins, Paul of NC and JoAnne of PA. Dr. Garbarini received his B.S. in Chemistry from Manhattan College in 1944 and his Ph.D. in Chemistry from N.Y. University in 1956. He was a part-time instructor in both institutions. Victor enlisted in the U.S. Navy during WW II. He served at the Naval Research Lab in Washington, DC and later served in the Philippines where he received letters of commendations from the Navy and the Army Air Force. In 1950 he began his professional career with the DuPont Company in Delaware as an Applied Physical Engineer. In 1955 he joined Esso Research and Engineering Co. in NJ as an Engineer. In1959 he joined AT&T Bell Labs as an Integrated Circuit Development Scientist in NJ. In 1963 he transferred to the advanced development facility Lab in Allentown, PA. In 1987 he retired as a Distinguished Member of Technical Safety Engineering in the semi conductor industry. Victor was the inventor and co-inventor of numerous U.S. Patents. He belonged to St. Anne’s Catholic Church where he served as Lector, Eucharistic Minister, Bible study leader and weekend parish retreat leader. Since 1991 he resided in Bethlehem Township and was a member of Our Lady of Perpetual Help Catholic Church. He will always be remembered for his service to his country, his profession, his community as well as to his family and his faith. He is survived by his 3 children: Victor R., Paul E. and JoAnne M. Garbarini. A celebration of his life, a Catholic Mass of burial and a memorial service will be held in the near future. In lieu of flowers, contributions may be sent in memory of Victor to: The PA Pro-Life Federation, 4800 Jonestown Road, Suite 102, Harrisburg, PA 17109; Tel: 717-541-0034; www.paprolife.org.

The family of Victor C. Garbarini created this Life Tributes page to make it easy to share your memories.

Send flowers to the Garbarini family.